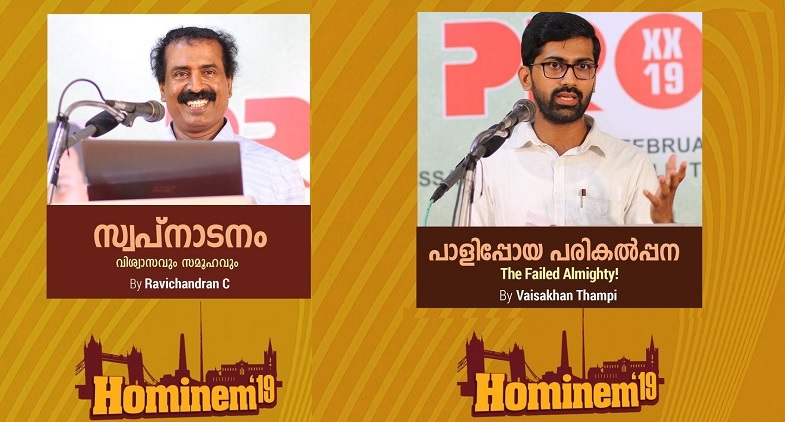 LONDON April 18: Alongwith the recent burst of religious activities within the UK Malayalee community there is also the efforts by a very healthy group of the community striving to promote rationalism and science.

Two noted orators from Kerala are coming to the UK and Ireland in May 2019.

Eminent speakers Ravi Chandran C and Vaisakhan Thampi will address Malayalees in Dublin on May 4, 2019 and May 6 in London at the Spring West Academy Browells Lane Feltham TW13 7EF United Kingdom.

C. Ravichandran, writer and public speaker has been a formidable force in the revival of rationalism in Kerala and bringing a lot of the younger generation into its fold. He first came into limelight with his immensely popular Malayalam book based on the Richard Dawkins best seller “The God Delusion”. It was followed by several translations of Dawkins and other bestsellers of his own.

Blunt, sarcastic and unsparing in his attack of his opponents in the numerous public debates he participates in along the length and breadth of the state, he laces his talk with down- to- earth aphorisms and earthy humour. He is a well read person, has almost a dozen academic degrees to his credit and his familiarity with subjects as wide ranging as biology, medicine, modern physics and intricacies of theology and astrology is enviable.

According to Vaisakhan Thampi the society continued to be led by a certain set of illogical rules that were bereft of rationale thought. “We are all entitled to pursue careers of our choice, be they that of a scientist, teacher, politician or businessman. However, never are we permitted to choose our faith or if we wished to remain a freethinker. We are made to believe that our actions were viewed by a certain force,” he said in an interview.

Dr. Thampi also attributed the popular entertainment, several writings, and various teachings for the wide perception that existed in the society that women were inferior to men in every respects and were, therefore, labelled the weaker sex. Likewise, some people were portrayed to be superior to others by birth. The peculiar system of caste hierarchies continued to prevail in the society.

Pointing out that freethinking attitude was borne out of dilemma posed by conflicting perceptions, Dr. Thampi urged rationalists to effectively communicate their point of view to foster debates. “Rationalism must not be against believers, but for them. We do not have to wage a war to impress our views upon others,” he said.

However, it doesn’t go without saying that just like the religious groups within the Malayalee community bickering with each other, the same pattern is to be seen within the rationalists in the UK too. It can be presumed that once rationalism kicks in then logic and common sense would prevail and we will have an ideal community.