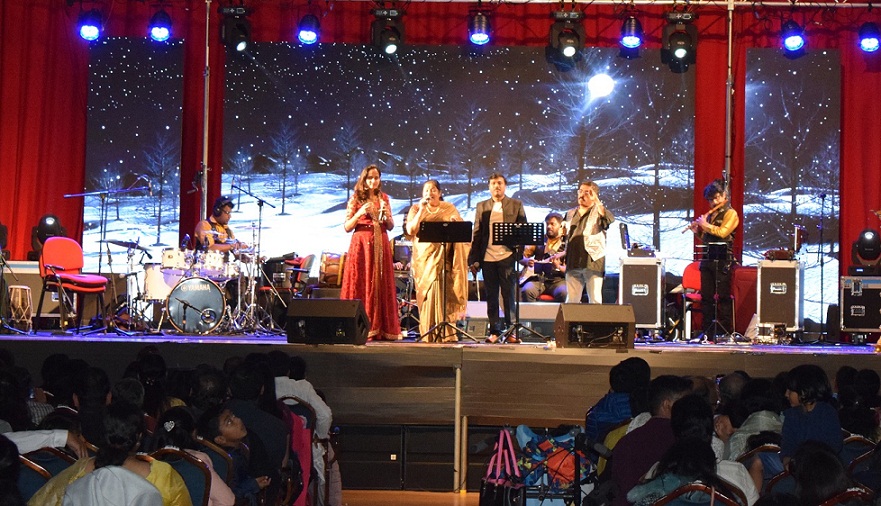 STOKE ON TRENT (MANCHESTER) Oct 22: Curtains came down to KS Chithra’s Live Concert in the UK on Saturday 19th October with the grand finale held at Kings Hall, Stoke on Trent ST4 1JH.
History would have been scripted with an Indian artiste doing Live concert in four languages on a trot. The concert at Stoke on Trent saw a packed hall subdued in silence pining to hear the sweet voice of the nightingale. They were lost in a legendary world of their own being held in daze and enjoying one of the most memorable events they have witnessed ever.

The master stroke of the concert was that KS Chithra had the whole event in her palm as she made sure that those who came were rewarded with an evening that would leave an indelible treat that will be etched in memory. She also didn’t forget to hold an audience choice round towards the later half of the show to ensure she sang to their hearts content.

The great show of camaraderie by the members of the Kerala Cultural Association of Stoke on Trent powered the whole show to greater heights with audience participation to the hilt.

Just the presence of the magnificent embodiment of peace, calm and serene composure sufficed for the whole ambience and atmosphere of the evening to set the tone for an evening of matchless musical entertainment.

The concert opened with the rendition of devotional song Keshadipaadam Thozunnen as a mark of admiration to her guru Janaki amma. This was followed by some of the most beautiful songs those were milestones in the history of Malayalam music. KS Chithra was supported by noted musician Sujith Vasudevan, better known with his stage name Sharreth. They were joined by singers Roopa Revathy and Nishad who all set the whole evening alight. Sharreth too didn’t forget to evoke giggles among the crowd with his innate unique light hearted comments.

Two singers from the UK – Vani Jayaram and Jia Harikumar – were given platform to share stage with the Live orchestra. Vani Jayaram regaled the audience with Hey Krishna from the film Kizhakkunarum Pakshi. Meanwhile, young and upcoming singer Jia Harikumar won the heart of the crowd with her song Aalapanam from the film Ragam. After the song KS Chithra made an announcement that Jia will be prodigy of UK Malayalees in years to come. Ragaswara announced the results of their UK Supertstar Singing Contest 2019, at the concert. The announcement of Winner was deferred until the concert at Stoke on Trent, because the winner Dr Vani Jayaram is a resident of Stoke on Trent. Dr Vani was presented with the winning certificate by KS Chithra, to a rapturous response from the audience. Dr Vani was surprised and happy.

Jiya Harikumar, who sang a great song, Alapanam that moved the audience, was one of the 7 second prize winners who were given an opportunity to sing at the concert of KS Chithra. What’s noteworthy is that Ragaswara ensures that many of the noted top singers who were not amongst the winners, from the UK Superstar Singer contest, were given a great opportunity to sing the invocation song at all the 5 concerts. It’s thoughtful way of encouraging singers with such recognition.

Ragaswara honoured KS Chithra with the title of “Ragaswaragini”, which was immediately liked by KS Chithra. A citation and Memento was also presented to KSChithra by the Ragaswara Directors Chanukya Rajagopala and Sanavaram Vishwanathan. The audience joined in the honouring of Chithra Chechi.

The hit number songs by Nishad saw the audience taking to the floor to dance to the tunes.

The KS Chithra Musicano orchestra demonstrated their mettle with some synchronising beats which elicited loud cheers from the crowd.
The concert concluded with the audience choice round where all requests from the audience were kindly obliged by the legendary singer KS Chithra.

The concert was hosted in the UK by Ragaswara, pioneers in the field of music entertainment. To know further or to get associated please visit www.ragaswara.co.uk.