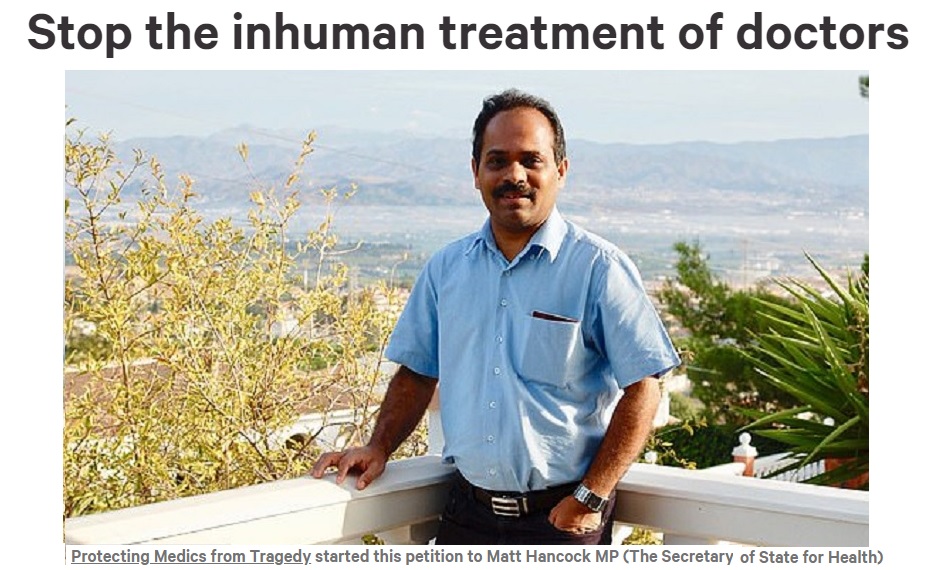 LONDON June 15: The widow of a doctor who took his own life within hours of receiving a letter from the General Medical Council is taking legal action against his employers and the GMC, with the support of the British Medical Association (BMA), which is the trade union and professional body of doctors in the UK

Sridharan Suresh, 50, a consultant anaesthetist with North Tees and Hartlepool NHS Foundation Trust, drowned himself in the River Tees on 2 May 2018. That day he had received an email from the GMC telling him that his NHS and private employers would be notified of allegations that he had inappropriately touched a 15 year old girl and that he would soon be called before an interim orders tribunal.

An inquest had previously Dr Suresh was under the impression the police investigation was to be discontinued as the drug can cause hallucinations and there were no witnesses to the alleged incident. His hopes were shattered when he received an email from the General Medical Council (GMC) announcing it was continuing its probe. He was found dead the same day after messaging his architect wife, Visalakshmi Suresh, to say he had done nothing wrong.

Visalakshmi Suresh said the agencies had failed her husband, whom she described as a loving family man and a dedicated doctor, and accused them of negligence.

During the inquest into her husband’s death, she recalled the days before he died. “Everything was quietening down. He was consistently reassured there were unlikely to be any further actions and that he would be able to return to work as soon as possible… but then all of a sudden something lands on him and he was alone.”

On 2 May 2018, Sridharan Suresh, consultant anaesthetist with NHS, received an email from the GMC informing him that he would be subject to an interim orders tribunal. Just hours later Dr Suresh sent an email to his wife while she was at work, saying he had done nothing wrong, but could not go on any longer, and took his own life.

After the death of Dr Suresh, a petition was launched by his friends and family to Health Secretary Matt Hancock, saying that doctors are accused of misconduct and are being treated as guilty before any investigation by the employer and GMC. According to the petition, number of doctors are being investigated by the GMC and have committed suicide and the GMC is ‘not accountable’ for this loss of life. This must be stopped.

“Dr Suresh was an anaesthetist who gave sedation to a patient for a dental procedure. The sedative given occasionally causes sexual hallucination. The patient accused the anaesthetist of inappropriate touching but there was no witness to this. The patient’s description of the accused person was completely different to that of Dr Suresh.

“However, not only did the police commence an investigation, Dr Suresh was also suspended from work by his employer, restricted from being alone with his own son by the social services and reported to the GMC by the police. A month later, the GMC wrote to him advising that they too had opened an investigation and that he should attend a hearing in 3 weeks when his registration may be suspended. At this point Dr Suresh took his own life.

The British Medical Association said in a statement: ‘The widow of a doctor who took his own life is to be supported by the BMA in her claim against her husband’s former employer, and the GMC, for negligence and under Article 2 of the Human Rights Act – the right to life.

The letter will say the trust’s failings contributed to Dr Suresh’s decision to take his own life. It will say the trust owed him a duty of care and breached that by wrongly informing Dr Suresh that he would not be referred to the GMC, failing to update Dr Suresh or their medical director when the police made a referral to the GMC and failing to take steps to protect Dr Suresh’s mental health in light of those developments.’

‘A letter before action has been sent to the GMC, from the BMA appointed lawyers. It says the GMC should have known there was a real and immediate risk of suicide, and that there were system failures after the GMC failed to take any steps to liaise with Dr Suresh’s employer or the police to assess his vulnerabilities, despite Dr Suresh telling his trust how the investigations were affecting him and his family.’