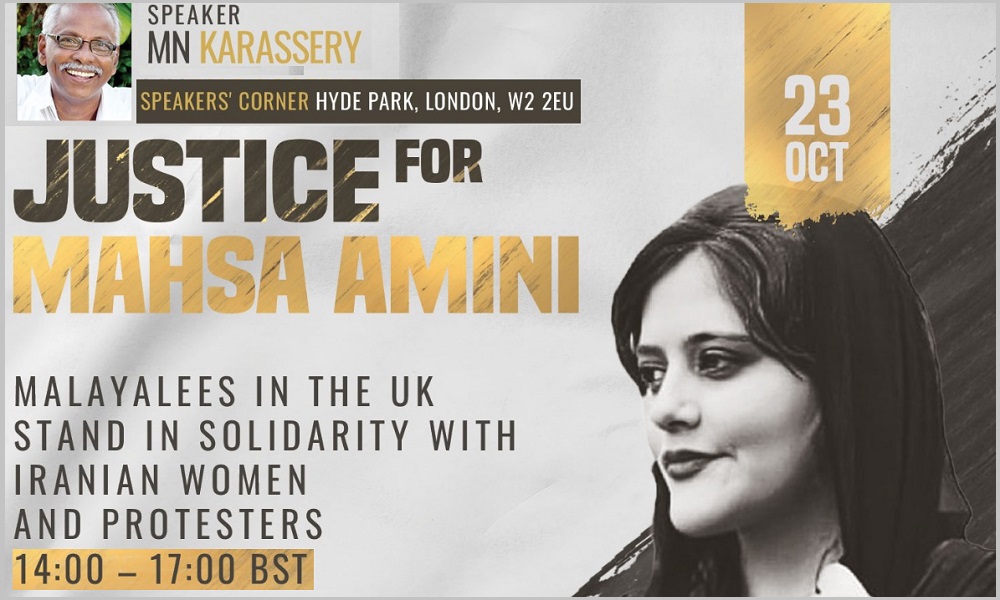 LONDON Oct 12: A group of Keralites in UK will hold a public meeting on October 23 in London’s Hyde Park to protest against the Iranian government’s crackdown on women and girls who do not adhere to the country’s strict dress code.

On September 16, Mahsa Amini died after being detained by so-called ‘morality police’ for allegedly not following the country’s dress code while visiting the capital city Tehran.

Since then thousands of angry women and girls have taken to the streets of Iran shouting chanting Zan, Zindegi, Azadi (Woman, Life, Freedom) against the mandatory hijab laws imposed by the government.

A group of Keralites under the leadership of noted writer and lecturer M. N. Karassery, who is on a visit to the UK, will gather in London’s Hyde Park on Oct 23 from 2pm to 5pm, to pledge solidarity with the women’s rights protests ongoing in Iran. Mohiyuddin Nadukkandiyil Karassery, commonly known as M. N. Karassery, is a writer and critic of Malayalam language.

All are invited to attend this meet. Your presence and support are definitely expected to make this performance a success, said the organisers.

Although the protest started in Iran over the death in police custody of Mahsa Amini, a 22-year-old woman arrested by religious police for not wearing a headscarf as per the instructions of the Iranian government, it has now become a worldwide protest against women’s inequality and oppression.

The protest in Iran is not only against the hijab but also against women’s right to choose, which exists in many countries.

Solidarity is needed for the struggle in Iran as many are sacrificing by giving their life by protesting. As the ill effects of religious ideological totalitarianism continue to be felt globally, any voice raised against it is very important.

Although the initiative is taken by the small Malayali community in the UK, everyone (religion, caste, gender, race, language, color) are welcome.