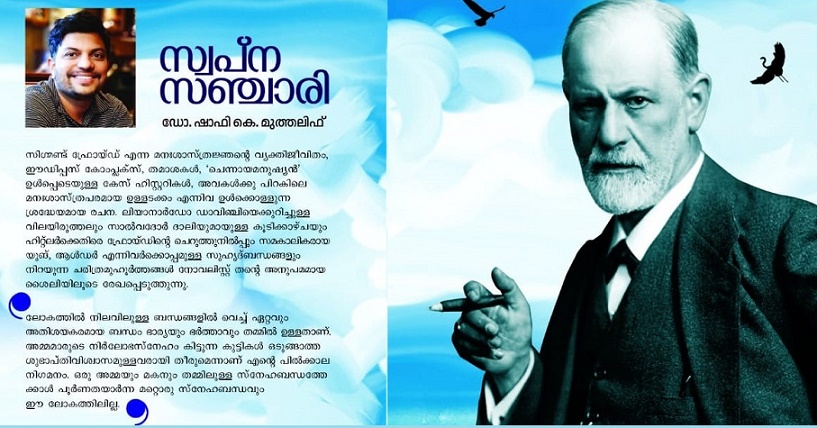 LONDON July 30: Swapna Sanchari (Dreamer) is the first novel by Shafy Kalakkattil Muthalif which has been just launched by one of the leading publishers in Kerala, Green Books.

Shafy, a Consultant Psychiatrist in Ipswich, did an academic presentation on the book by Freud “The interpretation of Dreams”. This led him to write a book on him. He decided to do it in a novel format so that common man could nderstand the principles easily.

This Thrissur native from Kerala did medicine from Thrissur Medical College and completed higher studies in Psychiatry from the UK which puts him the right frame of mind to do a novel on the noted  psychologist Sigmund Freud.

Shafy got inspired from the various prizes he has received for various literary events for short stories and arts competitions.

Shafy’s wife too is a consultant psychiatrist in Ipswich. Their daughter, 15-year-old Zuleikha attends Colchester Grammar School and son Zahir is a 8 year-old studying in Britannia Primary School in Ipswich.

The novel, Swapna Sanchari, stars Sigmund Freud, the famous psychiatrist who is best known for his book on interpretation of dreams.

Therefore, the beginning of this book unfolds through one of his childhood dreams and weaves its way through his eventful personal life as well as the struggles he faced with his minority identity as a Jew.

Along with such topics, the book also deals with the important psychological principles he put forward.

In addition to the analysis of dreams, it also relays the complex imagination of the Oedipus complex developed. He has written about the psychology behind jokes that we think are harmless. It all unravels in this book.

The other key subjects of the discussions  are about his assessment of the genius Leonardo da Vinci and his meeting with the infamous, Salvador Dali.

The book is set against the period of WW1 and WW2 and is a poetic description of the resistance and escape of this intellectual who did not hesitate to speak out against the Nazi regime and Hitler.

Although there was no difference between the views of his other Jewish contemporaries, such as Albert Einstein, we can see that Freud did not rush to escape like Einstein.

The novel is also about the culmination of a series of friendships and disagreements with psychologists, including prominent figures like Jung and Adler.

The novel also tells of a special father-daughter relationship with his own daughter, Anna Freud.

The cover of the book is by artist Mansoor Cheruppa and shows image of Freud with a burning cigar between his fingers against the backdrop of slightly mysterious clouds and birds reflecting dream patterns.

A study by Dr. Sukumaran, a prominent psychiatrist in Thrissur, is also included in the book.

The book starts with an apt quote by Freud “Everywhere I go I find a poet has been there before me.”