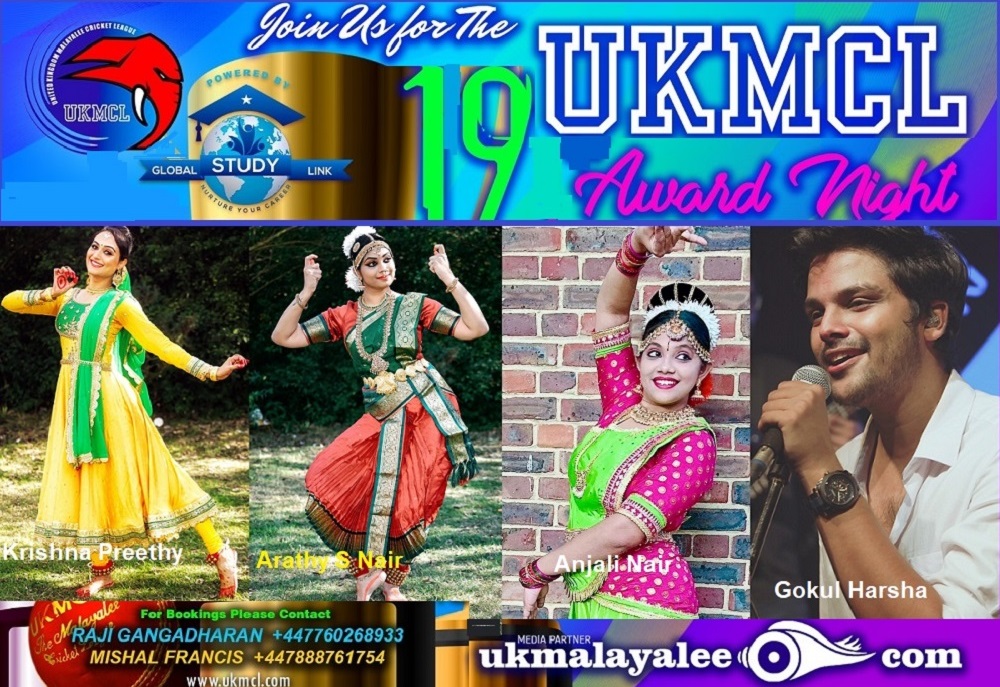 The event will host Gokul Harshan who will regale audience with semi-classicals and Bollywood dances by Arathy S Nair, Anjali Nair and Krishna Preethy and Live DJ.

The celebrations are the culmination of a successfull cricketing season in the summer of 2022. UKMCL will be celebrating the talent, commitment and cooperation from their players, sponsors and well-wishers alike. UKMCL moves into the 2023 season with more vigour with participation from several major teams from London and Kent.

Excitement is often the word coined with UKMCL, the 2022 season was no exception. Two new teams performed exceptionally well in their inaugural season. Three Caps CC enthralled supporters to become UKMCL League and League-Cup Winners while HMCC brought their A game to the UKMCL T20 competition to get their name on the Trophy.

The celebration will bring together the Keralite community who are passionate about their most favourite sports in the UK. UKMCL has in the last decade become a way to provide a social platform for incoming youngsters to integrate and become part of one exclusive UK Malayalee Cricket fraternity.

Alongside the winning teams UKMCL have prepared a host of performance awards, a full list of winners can be found at the end of this report. The hosts have asked the attendees to bring your dance shoes to dine with entertainments, fun and camarederie.

It is a first come first serve basis and therefore reserve your tickets in advance by making contacts with the below. Entry is by tickets – £15 for adults and £10 for students. For ticket details please contact Raji Gangadharan on 07760268933 or Mishal Francis on 07888761754.

Nawas Rawther​ will receive the Special Award for Outstanding contributions to community cricket.

“Amongst the many, some individuals have supported the league and the community in all forms of the game for over 35 years. UKMCL is honouring ex-Chairman Nawaz Rawther for his outstanding contributions to community cricket in London. Nawaz started playing community cricket in east London in the late 80s.

“Nawaz continued his playing career captaining Global CC and plied his trade as an apt bowler and shrewd captaincy. Nawaz continued supporting local cricket beyond his playing years and was a very capable UKMCL board member. Nawaz went on to become chairman, his tenure has seen the League flourish and his contribution has been a big part of UKMCL success”, said a note from the League.

“UKMCL’s continued success is a testimony to the collaborative effort of the organisers, players, well- wishers and sponsors. This year, UKMCL have had continued support from sponsors who also share and recognise the passion for community cricket development. We are very proud to be supported by the following partners”, added the note.

Those who wish to know more about or be part of the League contact secretary@ukmcl.com