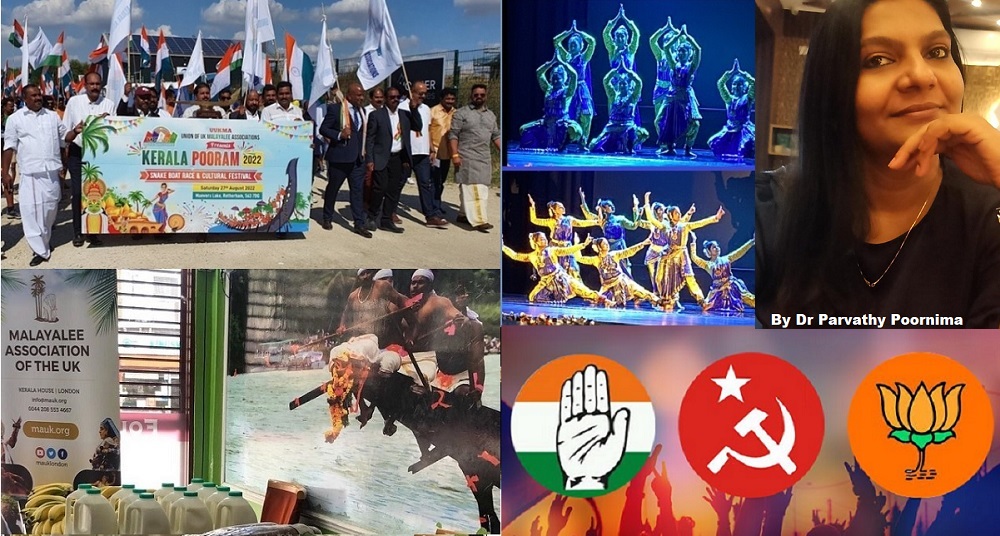 The article investigates the role of Non Resident Keralites (NRKs) in the UK amidst anti-immigrant sentiments and communal tension in contemporary UK. It emphasizes on the need of challenging the homogenized Indian identity in terms of understanding the diversity among Indian diaspora communities in the UK to mark the role of reasonably accomplished communities like that of Non Resident Keralites (NRKs) in leading rather peaceful diaspora life and activism.

The role of diaspora in cultural diplomacy is highly rewarding for host countries and is recognized globally. Given the effective diaspora activism, it is indispensable to document the socio-cultural profile, organizations of NRKs besides their contributions in the form of remittances to the host country. NRKs forming one of the skilled Indian communities living abroad bring to the table immense potential with this regard.

Two scenarios that brought Indian diaspora in the UK to headlines recently is communal clashes at Leicester and the comment made by former Home Secretary Suella Braverman about Indians as ‘visa overstayers’. Why the overarching ‘Indian’ or ‘South Asian’ identity of ethnic minority communities is problematic is a question worth pondering. It necessitates the need of asserting the diversity among Indian diaspora communities and the role of reasonably accomplished communities like that of Non Resident Keralites (NRKs) in leading rather peaceful diaspora life and activism.

2.3 per cent of the total population of the UK constituting Indians. Punjabis, Gujaratis, Bengalis, Keralites and Tamilians form majority of the British Indians. As Indians make up the bulk of immigrants who received the skilled worker visa in the UK in 2021, NRKs being the most literate and qualified communities stand a fair chance. According to a World Bank report, India’s remittances reached over 83 billion dollars, in 2020 despite the Covid-19.

Remittances from the US, the UK, and Singapore comprise of 36% of the total. Kerala ranks second, after Maharashtra among the top recipient states. Hence remittance from the UK diaspora forms one of the sources of earnings of Kerala. Given the effective diaspora activism, it is indispensable to document the socio-cultural profile and prevalence of organizations of NRKs besides their contributions in the form of remittances.

Organizational activism forms the key facet of NRK life in the UK. As far as philanthropy is concerned, UUKMA and major decade old organizations in Newham and Croydon boroughs deserves special recognition.

UUKMA is the umbrella organization with membership of more than 130 member associations that renders cultural exchange through various endeavors.

Malayalee Association of the UK (MAUK), based in the Newham borough of London is UK’s first and largest service-oriented Malayalee organisation. It recently received the prestigious Newham Community Champions Award for its commendable and inspiring work since the start of the Pandemic.

Then there are various religious organisations who have considerable followers from the Malayalee community in the UK.

There are several grassroots organisations which have sprouted in the UK forming part of major Indian political parties such as the Congress, Communist and BJP.

Malayalee organisations and groupings are also involved in supporting the newly arriving migrants when faced with challenging situations and at time of emergencies and deaths.

The collective commitment demonstrated in the case of tragic death of two road accident victims at Gloucestershire, in January 2021 is an example. Luton Keralites Association and Union of UK Malayalee Associations (UUKMA) exhibited dynamic involvement and raised £70,155 in three days. Associations were also able to send mortal remains  of those who died in accidents or through illnesses to Kerala. Malayalee organisations spread across the UK are involved with such activities by lending a helping hand to the community when in distress.

Covid exposed the challenges faced by Indian students abroad. Around 1.41 million Keralites were brought back from various countries under the Vande Bharat Mission. There is no data available on the number of NRK student UK returnees during the pandemic. Ironically, record number of students has enrolled in the universities in 2022. Yet the risk factor analysis and security concerns are missing from the policy framework. Most of the NRK students are dependent on universities’ campus placements for employment.

Besides providing immigration and visa related information, NRK organizations could arrange student specific events and networks based on industry interactions, and career fairs for boosting employment opportunities. Organizational networks could also facilitate counseling services for NRK student survivors of post pandemic stress and various forms of violence. Equally relevant is the concern of NRK women diaspora. As Britain pays attention to the policies applicable to immigrant women who are on a spouse visa and are experiencing domestic violence and their claim for public funds, it is indispensable for Kerala to gender mainstream diaspora schemes.

There is considerable presence of NRK women nurse diaspora in the UK and there exist a few Nurses Forums to support and assist them. Illegal recruitment fees, debt, misinformation about working conditions and racial prejudices are some of the problems that nurses and other NRK healthcare professionals in the UK grapple with.

Organizations can fund professional research studies on this for fact finding and can provide emergency helpline services. They could also launch effective online awareness campaigns to tackle problems of healthcare professionals.

Pinarayi Vijayan, the CM of Kerala, during his recent visit for the conference of Lok Kerala Sabha on 10 October in London, stressed on the need of a comprehensive immigration law for job security and welfare of immigrants. The chief minister confirmed that Non Resident Keralite’s Affairs (NORKA), a nodal agency of the government of Kerala has signed a MoU with NHS, UK and other integrated care partnerships to facilitate migration of healthcare professionals.

No ethnic minorities of Indian descent are to be spared from the long term impact of the sporadic violence erupted in Leicester. As per the UK data, about 6.6% of Indians live there. The Leicester episode unmasked the growing communal divide among Indian diaspora and underpins the need of more inter cultural exchanges through peaceful community engagements. Cultural and racial profiling of Indians fuels migrantophobia.

Depiction of Indians as visa overstayers and other forms of anti immigrant sentiments poses risks to the ongoing negotiations on India-UK Free Trade Agreement, as relaxing immigration rules is part of the deal. Though one comes across cases of Indians related to visa fraud in the UK, not many of the accused are Keralites. Nonetheless there are criminal cases reported against NRKs on child molestation and other forms of sex offences over the years. Prior to Braverman, Priti Patel was also harshly criticized for her anti immigration stance and lack of empathy for refugees.

The potential of NRK organizations of visible secular character in challenging stereotypes and enhancing integration should not be underestimated.

They celebrate Onam, Eid, Christmas, Vishu and other festivals with zest and harmony. On taking stand on political issues worldwide, they confirm their solidarity. A group of NRKs are to hold a gathering on 23 October at Hyde Park, London to protest against the Iranian government’s crackdown on women’s rights.

Nevertheless the associational participation of NRKs at demonstrations against the Indian state held in London is confined to few registered charities. The joint celebrations of festivals on one hand and the limited participation of NRKs in mobilizations like that of anti-CAA protests on the other, makes one skeptical about their latent diasporic secularism.

It is time Malayalee organization in the UK collectively come forward to play a more active role within the mainstream Indian community to make the contribution, they deliver at present to their community, by helping them to reach the wider Indians settled in the UK.

A comprehensive diaspora policy by the government of India could help these communities. Indian parliamentary panel’s recent criticism of the government on lack of ‘clear-cut diaspora policy’ is noteworthy. All immigrants do not register with the Indian Embassies abroad and the statistics varies because of the mobility of the diaspora. The ministry is unable to implement welfare schemes and address the challenges being faced by the communities without a database. The panel suggests that the Indian embassies abroad shall play a ‘more pro-active role’, to keep better outreach and expand closer contact with the diaspora community.

Government of Kerala is yet to prepare official data bank of NRKs. The unavailability of precise data on the population of NRKs in the UK poses challenges to analysts and policy makers. The setting up of NORKA, Kerala in 1996, has been a milestone in terms of interventions. It provides wide range of services like rehabilitation of return Emigrants, awareness campaign on illegal recruitment &visa check, 24 hour helpline/call centre etc. Yet there are no specific schemes meant for NRK students or women in distress.

UK based lawyer Eby Sebastian (UUKMA Spokesperson) opines that, government of Kerala shall maintain desks to collect data of travelers to the UK at airports in the state for creating database. From student travelers, during pandemic or otherwise, the government may collect certain amount of money similar to insurance to meet unforeseen contingencies that could be refunded on their return to Kerala.

As the CM confirmed recently, the state of Kerala aspires to hone ideas and support of NRIs for creating education, industry and employment opportunities. The role of diaspora in a country’s softpower and cultural diplomacy is highly rewarding for host countries and is recognized globally. NRKs forming one of the skilled Indian communities living abroad bring to the table immense potential with this regard.

Dr Parvathy Poornima teaches at the department of International Relations, Peace and Public Policy at St Joseph’s University, Bangalore currently. Dr Parvathy holds a PhD from the Centre for European Studies, School of International Studies, Jawaharlal Nehru University, New Delhi. She has fourteen years of professional experience constituting research, teaching and advocacy. She has published articles on topics related to diaspora studies in edited books and journals. She also worked with School of Liberal Studies, Pandit Deendayal Energy University and Study Abroad Programme and Diaspora Research Centre, Gujarat University. Dr Parvathy has visited Universities in London and India and has presented papers for various national and international conferences. She has also worked with non-government organizations based in New Delhi and Kerala on women’s rights and human right issues. She enjoys reading poetry and reviewing books.