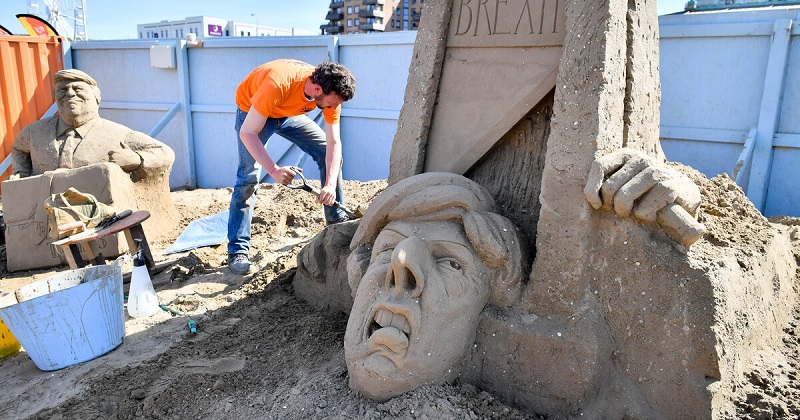 LONDON May 15: On a beach in south-west England, a Dutch artist is hoping to change minds with a sand sculpture showing Prime Minister Theresa May cutting off her own head with a guillotine named Brexit.

The sculpture, which shows US President Donald Trump and Russia’s Vladimir Putin smiling as they look on, is on display at a festival in Weston-super-Mare.

Some locals reportedly expressed disgust at the macabre theme, but the local authority defended it as “thought-provoking art”.

Artist Johannes Hogebrink, who is against Brexit, said it showed May “as she attempts to cut off England from Europe but in the process cuts off her own head”.

It is entitled “What if they want to divide us?”, following the festival theme this year of “What if?”.

Hogebrink said he hoped visitors would enjoy it and “maybe some people will also think about their position on leaving the European Union”.

“I hope Theresa May will come and watch and pull the plug on the whole thing. That would be great,” he said.

A spokeswoman for North Somerset Council said: “The town is gaining a growing reputation for showcasing art in many formats and we welcome this.”

The festival, featuring 20 sculptors from nine different countries, is on until September. – PTI