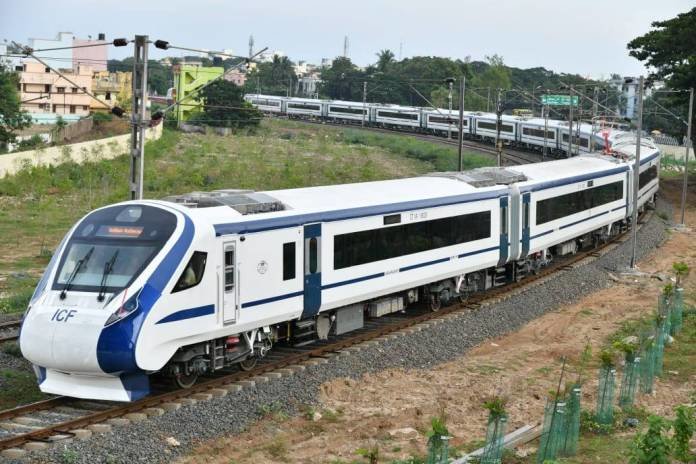 Thiruvananthapuram Aug 8: In a major infrastrcture project in Kerala, a new Rs 66,079 crore semi-high speed rail (SHSR) corridor will be set up linking northern Kasaragod district and the capital city in the south, that would cut down journey time from 12 hours to just four hours.
The state cabinet on Wednesday gave its clearance to the mega project, to be implemented by the KeralaRail Development Corporation Limited (KRDCL), a joint venture of the Kerala government and Ministry of Railways.

Chief Minister Pinarayi Vijayan made the announcement about the clearance to the project that is also expected to reduce both congestion and pollution on the roads, improve safety and reduce dependence on imported fuel.

The rail line, expected to be completed in 2024, would enable operation of semi-high speed trains with a maximum speed of 200 kmph that will pass through 11 of the 14 districts in the state and have 10 stations, including commercial hub of Kochi.

The journey time between Kochi and Thiruvananthapuram will be 90 minutes, a KRDCL release said here.

The announcement of the cabinet nod comes a year after KRDCL initiated a preliminary feasibility study and found the project viable, it said.

The KRDCL will need to acquire about 1,200 hectares of land for the project that will have the rails elevated along urban stretches and connect airports in Thiruvananthapuram and Kochi.

The feasibility report will be forwarded to the Railway Ministry for in-principle approval, the release said.

The completion of the double line spanning 532 km was expected to reduce congestion along the states railway traffic that has already touched 115 per cent of its capacity, KRDCL Managing Director V Ajith Kumar said in the release.

The proposed semi-high speed trains will initially have nine coaches and the number will be subsequently enhanced to 12. The travel charge is projected to be Rs 2.75 per km, and there will be an annual hike of 7.5 per cent, he added.

KRDCL expected a ridership of 67,740 passengers a day. Each train was estimated to carry 1,330 travellers in one direction during peak hours.

As for employment, the project will generate 50,000 jobs during the construction of the corridor and 11,000 once it was functional.
KRDCL will complete the preparation of Detailed Project Report by around November, 2019.

The Centre and state will need to provide Rs 7,720 crore each as their share.
The Kerala government will spend Rs 8,656 crore on land acquisition and allied matters, Kumar said.

Thiruvananthapuram-headquartered KRDCL was floated in January 2017 to execute viable railway projects on a cost-sharing basis.

The feasibility study, carried out by Paris-based Systra as the general consultant for the KRDCL, had projected the internal rate of return as 5.6 per cent and 8.1 per cent for 30 and 50 years, respectively.

The train from Thiruvananthapuram will halt in Kollam, Chengannur, Kottayam, Ernakulam, Thrissur, Tirur, Kozhikode and Kannur before reaching Kasaragod.

The SHSR line will be 100 per cent green project for whichKRDCL will be tying up with IIM-Ahmedabad and plans to depend heavily on solar power generation and re-used concrete and steel.

The corporation is set to adopt last-mile connectivity, with system-driven e-vehicle public transport system, multi-modal integration, charging and parking stations, which would take Kerala to next generation of urban mobility .

Planned urban development of the cities along the corridor and development of new cities down the SHSR line can derive benefits for the socio-economic development in the regions served by the line, the release added.