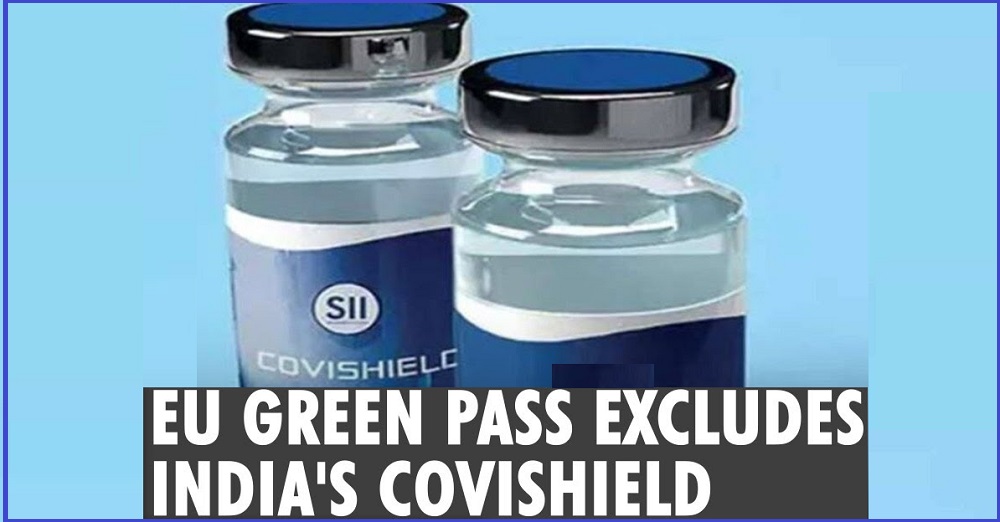 LONDON June 29: People in India who have been inoculated with the Oxford-AstraZeneca vaccine may not be eligible for the European Union’s “green pass” scheme, according to reports. Covishield is the Indian-made version of AstraZeneca’s Vaxzevria jab, which has been authorised in the EU.

The move comes amid reports that Covishield is not yet eligible for the digital green certificate, a EU-wide travel pass, set to launch on July 1. The certificate is currently for EU citizens only.

The vaccines currently eligible for the green pass have all been approved for marketing by approved by the European Medicines Agency (EMA). The EMA told the BBC on Monday evening that Serum had not yet applied for authorisation.

Covaxin, an Indian homegrown vaccine, which has not yet received WHO approval, has also not applied for EMA authorisation. Sputnik V, which is the third vaccine approved for use in India and by the WHO, is on the EMA’s list of vaccines currently under review. But it has not been rolled out yet in India due to supply delays.

The ‘Green Pass’ is being launched to enable hassle-free travel into and between the EU countries. However, only the ones inoculated with EMA-recognised vaccines will be able to claim this “digital passport”.

Serum’s CEO, Adar Poonawalla, said his company hopes to “resolve this matter soon”, referring to the fact that Covishield has not yet been authorised in EU.

I realise that a lot of Indians who have taken COVISHIELD are facing issues with travel to the E.U., I assure everyone, I have taken this up at the highest levels and hope to resolve this matter soon, both with regulators and at a diplomatic level with countries.