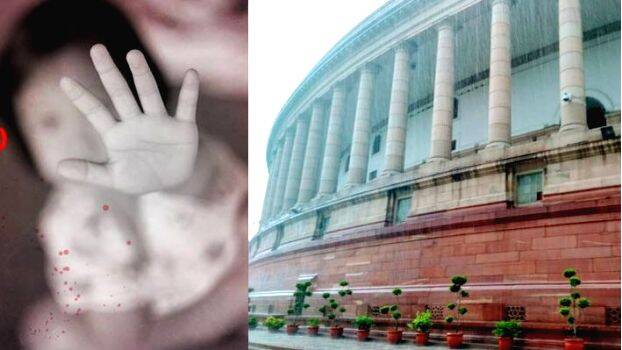 NEW DELHI Aug 2: A bill seeking to provide death penalty for aggravated sexual assault on children and greater punishments for other crimes against minors was approved by Parliament after it was passed by the Lok Sabha on Thursday.
Piloting the Protection of Children from Sexual Offences (Amendment) Bill, 2019, Women and Child Development Minister Smriti Irani said it aims at making offences against children gender-neutral.

The Bill, which was already passed by the Rajya Sabha on July 29, defines child pornography, making it punishable.

Cutting across party lines, members supported amendments to POCSO Act though some demanded that Bill be referred to the standing committee or select committee as it makes certain offences punishable with death.

Seeking passage of the bill in Lok Sabha, Irani said this bill is not related to vote bank politics but to save the future of India.

In an apparent reference to Congress MP Ramya Haridas who raised the Unnao rape issue in the House, Irani said this bill should not be looked from the perspective of politics and should not be politicised for personal benefits.

Responding to Haridas, Irani said it was very unfortunate that when she was speaking some members who were supporting her were actually having fun.
She further said the courts of this country have even power to punish MLAs and MPs.

The Bill, said Irani, would provide added legal protection to 39 per cent of population or 43 crore children, irrespective of whether they are a girl or boy.

Besides other things, she said, the Bill defines child pornography so that sexual predators indulging in such heinous crimes could be punished.

Regretting that 5,000 persons followed the child pornography site operated by a person, Irani said, “This is a matter of grave concern for the society. The site had even shown the rape of a minor girl, he added.

Recalling a case wherein children were administered drugs and hormones to make them sexually active, she said, the law is aimed at providing stringent punishment to such offenders.

“We want to provide added protection to children…in rarest of rare cases death (penalty),” she added.

Replying on the bill, Irani assured that under witness protection scheme, all measures such as doing threat assessment of the victim and witness and if required even changing their identity and others were taken to ensure their safety.

On if the juvenile is involved in sexual offence against the children, the minister said that cases come under juvenile justice act and the death penalty could be given only if he is above 16 years of age and juvenile justice board finds that he has an adult mind.

The minister acknowledged that the rate of conviction in sexual offences is very slow and informed that under Nirbhaya Fund, 1023 fast track courts will be established across the country and 18 state governments have already been taken on board by the government.

She also said that a national database for such cases have also been started and about 6.2 lakh sexual offence cases were registered in that base.

Sharing the details of awareness programme among children, the minister said CBSE will carry out programmes in school across the country to make aware children about good and bad touch.

She further said more than 40,000 teachers will also be trained for the same.

Participating in the discussion, Su Thirunavukkarasar (Cong) suggested that since the bill has a provision for the death penalty, it should be sent to a Parliamentary committee for further scrutiny.

Rita Bahuguna Joshi (BJP) said the Bill will go a long way in bringing offenders against children to book.

Kanimozhi (DMK) said that the bill should be sent to select committee or standing committee as harsher punishment could deter people from reporting the crime.

While presiding over the proceedings, BJD’s Bhartruhari Mahtab pointed out to Irani that the Hindi version of the POCSO bill used the word “balakon”, a term for young boys, while the English word “children” is gender-neutral.

To this, she responded that the legislative department of the government had vetted the bill and cleared it.

Rajiv Ranjan Singh of the JD(U) hailed the bill, saying it will curb the growing trend in the society toward such heinous crimes.

He, however, suggested the government work towards having special courts across the country and ensure speedy trial so that the cases of sexual crimes against children are taken to a logical conclusion.

A short period of the trial will also minimise the chances of accused influencing witnesses. Citing a survey, he said the cases of sexual harassment against children have risen by 500 per cent.

TMC’s Satabdi Roy wondered if the death penalty will deter criminals and asked the government to explain as to what it is doing to help victims.
Shiv Sena’a Vinayak Raut supported the bill and sought a time-bound trial for the accused.

BSP’s Danish Ali also backed the bill, saying he supports capital punishment for those convicted under this Act even though he is ideologically against death penalty.

Ali (BSP) said he was against the death penalty for juvenile.
Hasnain Masoodi (NC) extended support to the Bill stating that the proposed legislation was for the 10 per cent of the victims and that for the remaining 90 per cent there was a need to strengthen the prevention system.

“We have to strengthen the prevention mechanism,” he said and added that it was high time to make stringent and effective law for the protection of children.

He also pitched for the need for an awareness campaign in society.
Kalyan Banerjee (AITC) expressed concern that in the media the identity of the victim and his/her family got leaked which he said should not happen.
Pritam Munde (BJP) stressed on the rehabilitation of the victims.