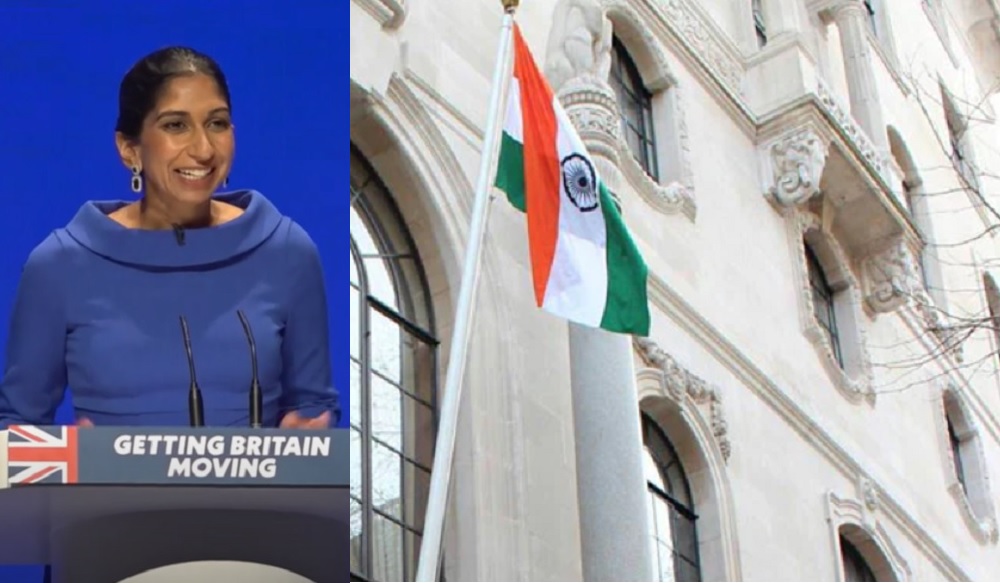 LONDON Oct 7: The Indian High Commission here on Thursday countered UK Home Secretary Suella Braverman’s claim that the Migration and Mobility Partnership (MMP) had not “worked very well” to say that India had initiated action on all cases raised with it under the agreement.
In response to a PTI query about Braverman’s interview in ‘The Spectator’ that branded Indians as the “largest group of people who overstay” their visas in the UK, the mission noted that India awaits “demonstrable progress” on certain commitments undertaken by the UK government under the MMP that was signed last year.

“As part of our wider discussions under Migration and Mobility, the government of India is committed to work with the government of UK to facilitate the return of Indian citizens who have overstayed their visa period here in the UK,” the High Commission of India statement said.

“As per data shared with the Home Office, as on date, action has been initiated on all of the cases referred to the High Commission. Further, UK has also undertaken to fulfill certain commitments as part of the Migration and Mobility Protocol, on which we await demonstrable progress,” it said.

With reference to Braverman’s controversial comments about having visa-related “reservations” over the proposed free trade agreement (FTA) being negotiated between the two sides, the High Commission noted that any future arrangements would be of mutual benefit.

“While certain issues pertaining to Mobility and Migration are currently under discussion as part of these negotiations, any comment on these matters may not be appropriate given that the negotiations are underway, and that any arrangement will include issues of interest to both sides,” the High Commission said.

Braverman, the Indian-origin minister who took charge at the Home Office last month, said she had “concerns” over the FTA with India fearing what she termed as an “open borders” migration policy.

“We even reached an agreement with the Indian government last year to encourage and facilitate better cooperation in this regard. It has not necessarily worked very well.”
Braverman’s contention that the MMP has not worked very well is seen as a clear indication that she is likely to withhold Cabinet backing for any visa concessions for India as part of an FTA.

This would put her on a collision course with her boss, Liz Truss, who is keen to stick to the Diwali deadline for an FTA with India as one of her highlight trade deals since taking over as the British Prime Minister.

On the Indian side, the ease of mobility for students and professionals has always been a key aspect of any trade agreement. – PTI