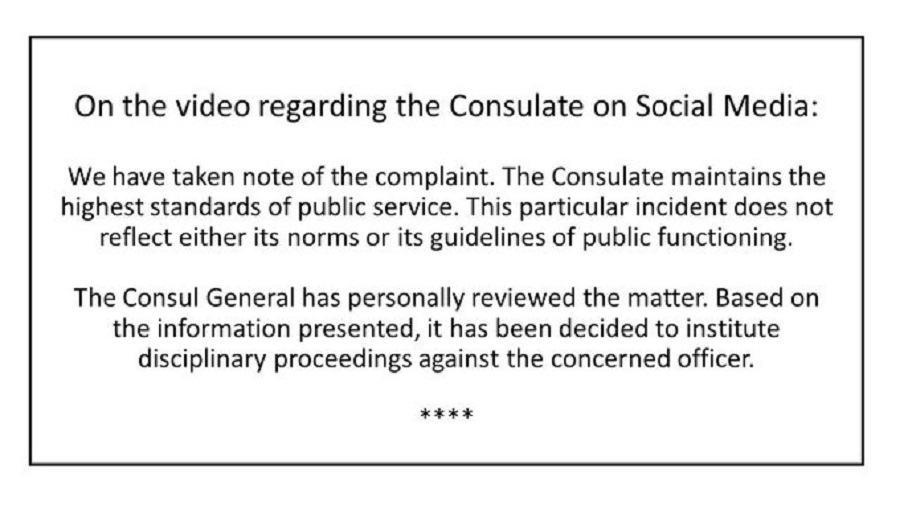 NEW YORK Dec 8: A video of an Indian Embassy official at the Indian Consulate in New York misbehaving with a woman applying for an urgent visa has gone viral, with many criticising the man for his rude behaviour.

In the video, the concerned officer is heard shouting at the applicant while refusing to give her a visa or explain why it was being rejected. Netizens have been tagging senior bureaucrats and ministers, requesting them to take action.

On 24/11/2021. Indian embassy New York. Her father had died & she wanted a visa for India. This is the obnoxious behavior of an Indian officer in the New York Consulate towards her. @DrSJaishankar @MEAIndia @PMOIndia you can’t ignore this. pic.twitter.com/7ckWXnJqP0

A statement posted on the official Twitter account of the Consulate General of India, New York, said that the incident was personally reviewed by the Consulate General. They also added that the staff’s rude behaviour doesn’t reflect “either its norms or its guidelines of public functioning” and disciplinary actions has been taken against the concerned officer.

While some stressed that this is not an isolated incident and they have been subjected to such rude behaviour in the past, others also shared their good experiences at Indian embassies in foreign country.