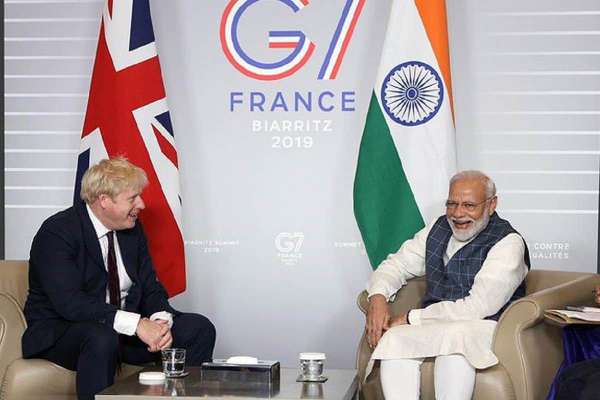 PM Modi met Johnson on the sidelines of the G-7 Summit being held in this southwestern French city. The prime minister arrived in Biarritz from Manama, the capital of Bahrain, after concluding the first-ever prime ministerial visit to the Gulf nation.

“We had a great meeting Prime Minister Boris Johnson, where we got to discuss ways to further cement ties in trade, defence, and innovation. India and United Kingdom relations are robust this benefits our citizens greatly,” Prime Minister Modi said in a tweet.

PM Modi began by congratulating Johnson on England’s spectacular win in the Third Test of the Ashes,” he said.

It was the first meeting between the two leaders after Mr Johnson became Prime Minister last month, the third in fairly quick succession since Britain voted to leave the EU in June 2016 – following on from David Cameron and Theresa May.

Their meeting came against the backdrop of the Indian government revoking the special status to Jammu and Kashmir and bifurcating the state into two Union Territories.

During a telephone call early this week, Mr Johnson told PM Modi that Kashmir remains a bilateral matter between India and Pakistan as far as the UK’s view is concerned.

“The Prime Minister made clear that the UK views the issue of Kashmir as one for India and Pakistan to resolve bilaterally. He underlined the importance of resolving issues through dialogue,” a Downing Street spokesperson said in an official readout of the phone call on Tuesday.

Tensions between India and Pakistan spiked after India abrogated provisions of Article 370 of the Constitution to withdraw Jammu and Kashmir’s special status and bifurcated it into two Union Territories, evoking strong reactions from Pakistan.

India has categorically told the international community that the scrapping of Article 370 was an internal matter and also advised Pakistan to accept the reality.