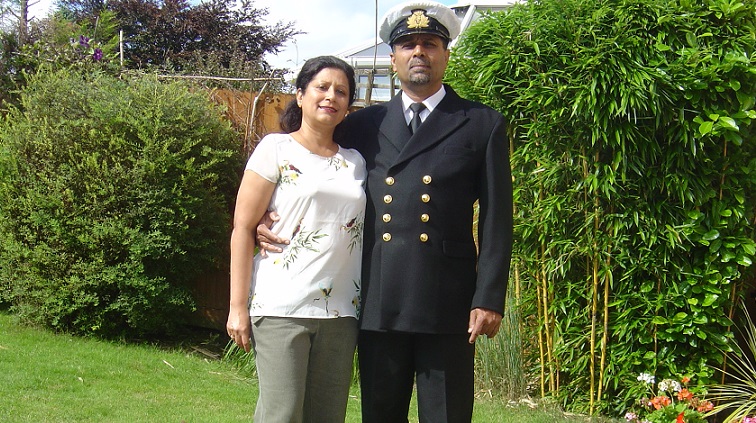 GRAVESEND (Kent) April 22 : “The Lord Chamberlain is commanded by Her Majesty to invite Captain Parameswaran Sudarshan Kumar Tampi and Mrs Anita Puliankalath to a Garden Party at Buckingham Palace on Tuesday May 21, 2019 from 4pm to 6pm”, read an invite to this UK Malayalee couple from Kent.

Garden Parties are an important way for the Queen to speak to a broad range of people from all walks of life, all of whom have made a positive impact in their community.

The Queen invites members of the public who serve in certain organisations such as the Port of London, Defence Forces etc. on a regular yearly basis to acknowledge their contributions towards the service.

Captain Parameswaran Sudarshan Kumar Tampi was invited to represent the Port of London Authority on the basis of his long service as a Marine Pilot which also includes acting as Duty Port Controller. Captain Tampi  joined the Port of London as a Marine Pilot in 1998 and worked his way up to a Class 1 Pilot and then a Berthing Pilot. Later the Berthing Pilot service was  transformed into a Haven Pilot Service which he is now a part of.

A Marine Pilot’s job involves Piloting ships from the outer extremities of the Thames Estuary (near Harwich/Felixstowe, Essex in the North to Ramsgate, Kent in the South) to the seventy odd  berths along the Thames stretching from Southend in Essex to Tower Bridge and Moorings. The distance involved can be upto 90 nautical miles.

The Port of London controls about 90 miles of the River Thames and is the reason why it is recognised as a strategic asset of the country, contributing hugely towards the economy,  jobs and ensures that all essential commodities are delivered to the population as well as exporting products in a timely manner. Captain Tampi also works as a Duty Port Controller at London Vessel Traffic Service located at Gravesend in Kent. There is always a Class 1 Pilot in charge of the London Vessel  Traffic service 24-7-365. He is essentially acting as the Harbour Master with delegated powers and ensures smooth running of the Port.

Captain Tampi came to the UK (Belfast) to do his Master Mariner’s Certificate of Competency or commonly known a Captain’s Licence in 1987. He lived in Dublin till 1997 and then shifted to Gravesend, Kent to take up a job as a Nautical Lecturer at the North West Kent College. He joined the Port of London in 1998. Since 2000 the couple have been living in Strood (Rochester), Kent.

The couple have one son, Kiran Tampi who has done his Master’s in Mechanical Engineering from Bath University and is now working with Target Energy Solutions in Woking, Surrey.

Previous to joining the Port of London Captain Tampi spent 20 years in the Merchant Navy. During my training period he was the Starboard Cadet Captain and received an award for this.

Captain Tampi did his Indian School Certificate from Hutchings High School, Pune in 1975 and topped his Class for the year and was presented with a Shield for the achievement.

He also studied in  Bishop’s High School in Pune. He joined the Merchant Navy on the 13th of September 1977 after completing his First Year BSc at Fergusson College, Pune. He had also  joined IIT Mumbai in 1977  but left to pursue a career at sea.