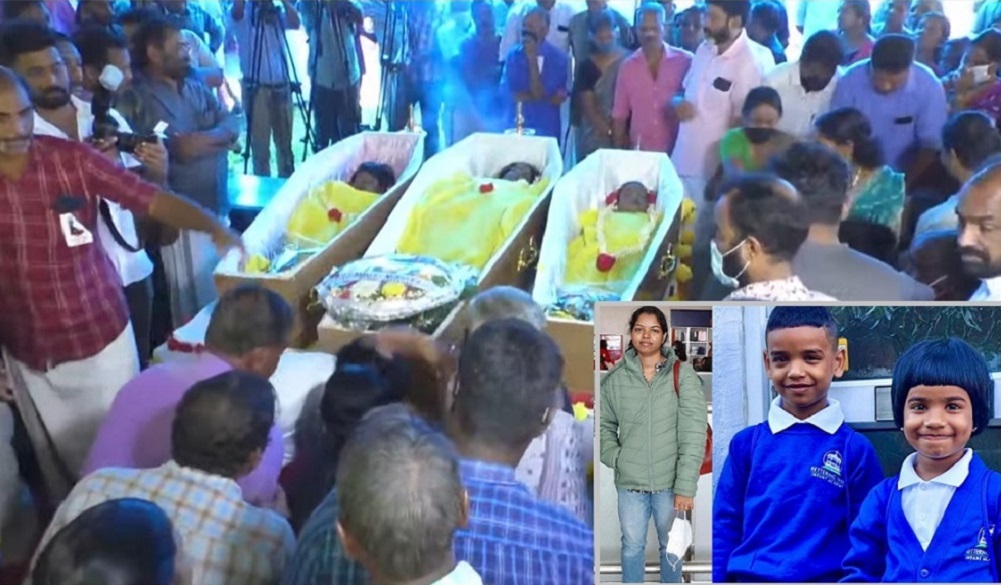 KOCHI Jan 14: The bodies of Keralite nurse Anju Ashok, her six-year-old son Jeeva Saju and four-year-old daughter Janvi Saju who died after being found with serious injuries at a flat in Petherton Court on December 15, were cremated in the premises of their home in Vaikkom in Kerala today (Saturday) January 14.

Anju’s husband and father of the kids, Saju Chelavalel, 52, was arrested and charged with three counts of murder on December 17, after the three victims were found at his address. He appeared at Northampton Crown Court on December 21 and was remanded in custody until a plea hearing on March 24.

A large crowd of Anju’s family members, locals and social activists witnessed the last rites at the family home in Vaikkom.

Since none of Anju’s relatives are in the UK, Anju’s colleague and Idukki charity group UK advisory committee member Manoj Mathew was assigned as the next of kin by Anju’s family. The police have sent Anju’s belongings, including gold, and children’s belongings to Manoj. They were handed over to Anju’s father with public servants and locals as witnesses.

It is learnt that two police officers investigating Anju’s case had informed that they would come home with the body but due to technical issues, they postponed the trip and they would return home the next day and meet Anju’s family and her husband’s family. Thomas Chazhikadan MP, C K Asha MLA and Minister Roshy Augustine were present to pay their respects.

The Indian High Commission in the UK bore the £6,400 cost of bringing the bodies home. Kettering Malayalee Welfare Association (KMWA) and UUKMA have also raised Rs 32 lakh to help Anju’s family. According to the office bearers of the association, the money will be handed over to Anju’s family the next day.

2 thoughts on “Bodies of Anju and kids cremated at home premises (Video): UK police officers to meet and speak to Anju’s parents in Kerala”