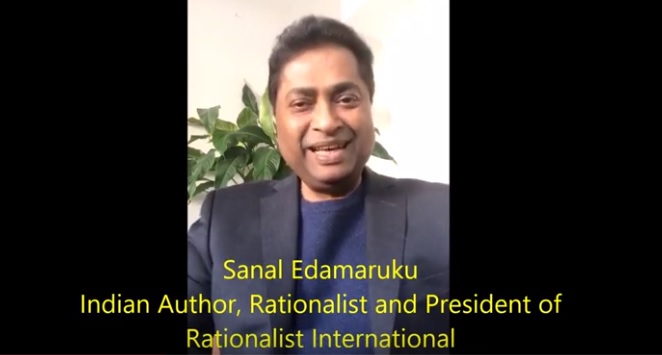 CROYDON May 17: Sanal Edamaruku, founder-president and editor of Rationalist International, will join the United Rationalist of UK (URUK), conference to be held on May 18, 2019 in Croydon. “Sanal Edamaruku will be joining us for the interactive session with the delegates and audience on 18th May”, said a press note from URUK.

Sanal Edamaruku is an Indian author and president of the Indian Rationalist Association and the author of 25 books and other articles. In 2012, he was charged by a group of Catholics with blasphemy for his role in examining a claimed “miracle” at a local church in Mumbai. He moved to Finland to evade arrest.

Edamaruku was born in 1955 in Thodupuzha, Kerala, India to Joseph Edamaruku, an Indian scholar and author, and Soley Edamaruku. Born in a Christian-Hindu mixed marriage, he was brought up without any specific religious influence.

At his parent’s insistence, he was the first student in India whose official school records listed “no religion”.

He became a rationalist-atheist activist at the age of 15, after seeing a neighbourhood athlete’s death after her family refused medical treatment because they believed in faith healing.

Edamaruku has been active in the Indian Rationalist Association (IRA) from the age of 15. Before becoming the president in 2005, he served as the General Secretary beginning in 1983, and has been the editor of its publication Modern Freethinker.

His many books and articles deal mainly with rationalistic thoughts and against superstition in India. His writings in Rationalist International are translated into English, French, German, Spanish, and Finnish.

Edamaruku has carried out investigations and demonstrations that helped expose frauds, mystics and god men as well as conducting campaigns against superstition in Indian villages. He refers to this as “Rationalist Reality Theatre.”

These investigations have attracted the attention of print and television media throughout Asia.

In December 2013, Edamaruku announced the launch of a new quarterly English language magazine The Rationalist on his blog. Contributors will include international rationalists on several continents and content will focus on science, reason, critical thinking and human rights.