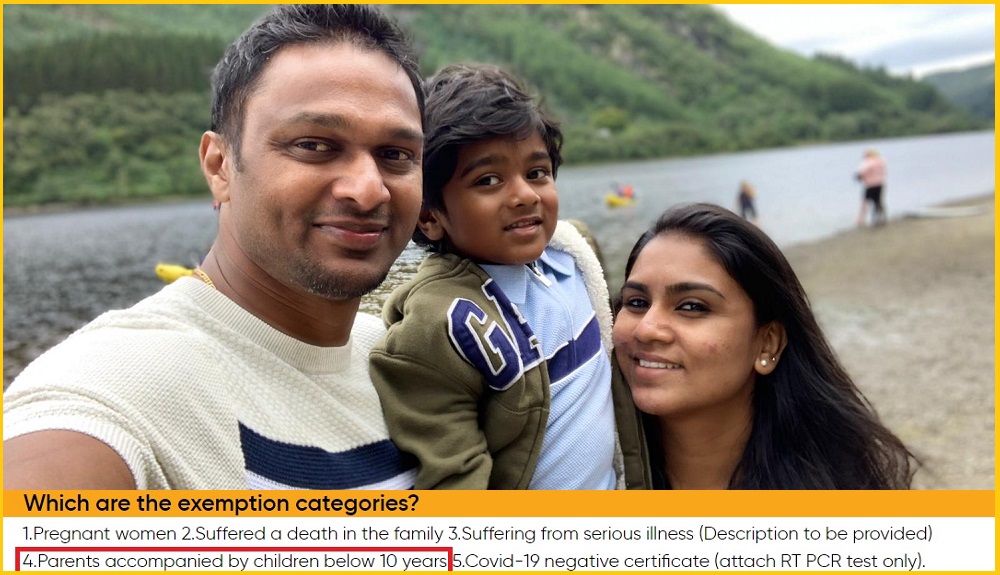 LONDON Jan 9: A three member family from Stevenage in the UK travelled to Heathrow airport after obtaining air tickets from a travel agency with all Covid tests obtained. Things didn’t go well for the family once they reached the Air India counter at the Heathrow airport.

Haridas Thankappan, his wife Athira Mohan and 3 year-old son arrived at the London Heathrow Terminal 2 on 7th January 2021 with all confirmed tickets and had the RT-PCR test for Covid for Haridas and his wife. His three year old son didn’t require the Covid test certificate as per the Air India guidelines published on its website. Children below the age of 10 who are travelling accompanied by their parents are exempted from having the Covid test certificate.

Speaking to this website, Haridas said: “As per the latest guidelines made available there is no requirement to do test for children under the age of 10. According to the Air India website and the information we received from the airline call centre it was quite clear that there is exemption for children under the age of 10. However, when we were at the Air India check-in counter we were told that our three year old son also needed the Covid test. I asked them to provide proof and written guidelines regarding this which they weren’t interested. The manager in charge or other officials available had nothing to show us as proof if there has been any changes made in this regard”.

“As per the manager in-charge the instructions they received from the higher authorities was only on 07/01/2021. Because of this we had to go through all the distress for nearly five hours at the airport. We offered for our son to have a test at the Heathrow airport but it was not available. We know the details of the manager and we will disclose in case of any further follow up”, Haridas added.

However, the blatant discrimination which happened in front of Haridas shocked him to the extent that he decided that no other family from Kerala should undergo such a disregard for the rules from officers from the north.

Haridas said: “My family and another family from north India had the same problem and they were also arguing about it to officials as they didn’t take Covid test for their 7 year-old-son. However, when it was all about the check-in time the staff allowed this north Indian family to travel and they checked them in. When I challenged this they told me that they had the test result with them. I was very much aware that they did not have it with him when we were talking to officials initially. We felt something unfair has happened to us and we were convinced that there was total discrimination”.

“I spoke to the High Commission on the emergency line but I didn’t get any proper guidance about the issue. Even the official I spoke had no awareness of the latest guideline which changed yesterday. I asked for the name of the official but he told he can’t give his name”.

“I have decided to raise this concern with the HCI as no one should go through such distressing situations again as it is paramount for authorities to maintain proper communication & everyone from our country should be treated equally & fairly”.