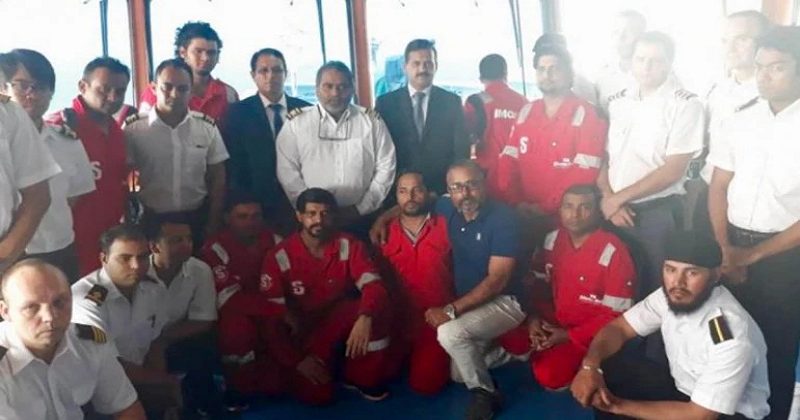 New Delhi July 26: Iran has released nine out of 12 Indians who were on board the ship MT Riah that was detained in early July, official sources said Thursday.
However, 21 Indians are still in detention in Iran — three from MT Riah and 18 from British oil tanker Stena Impero which was seized last week by the Iranian Revolutionary Guard in the Strait of Hormuz for alleged violation of international maritime rules.

Indian Embassy on Thursday got consular access to the 18 Indians who were on board Impero.

Also, 24 Indian crew members, who were on board shipping vessel “Grace 1”, which was detained by Gibraltar police authorities, are also under detention.

The boats have been seized amid ongoing tensions between Iran and the US since Washington began reimposing sanctions on Tehran.

Indian officials have met the 24 Indian crew members who were on board shipping vessel “Grace 1” and assured them that the government will take necessary steps to ensure their release and repatriation, the External Affairs Ministry said Thursday.

Iranian oil tanker “Grace 1” was seized off the Spanish coast earlier this month by British marines and Gibraltar police.

A team of the Indian High Commission in London met the Indian crew and staff on board VLCC Grace 1 on Wednesday, Minister of State for External Affairs V Muraleedharan said.

MEA Spokesperson Raveesh Kumar, at a media briefing in Delhi, said India had sought consular access which was granted on Wednesday and a three-member team visited and met all the 24 crew members.

“What we saw was that the crew members were very calm, very composed, and there was no sense of panic. They had been in regular touch with their family members.

We had assured them that the government of India will undertake all the necessary steps to ensure their early release and repatriation,” Mr Kumar said.

Giving an update on 18 Indians on board the British oil tanker Stena Impero which was seized last week by the Iranian Revolutionary Guard, Mr Muraleedharan said the embassy in Tehran has got consular access to the Indians.

All of them are fine, the minister said, adding India will continue to push for their early release.