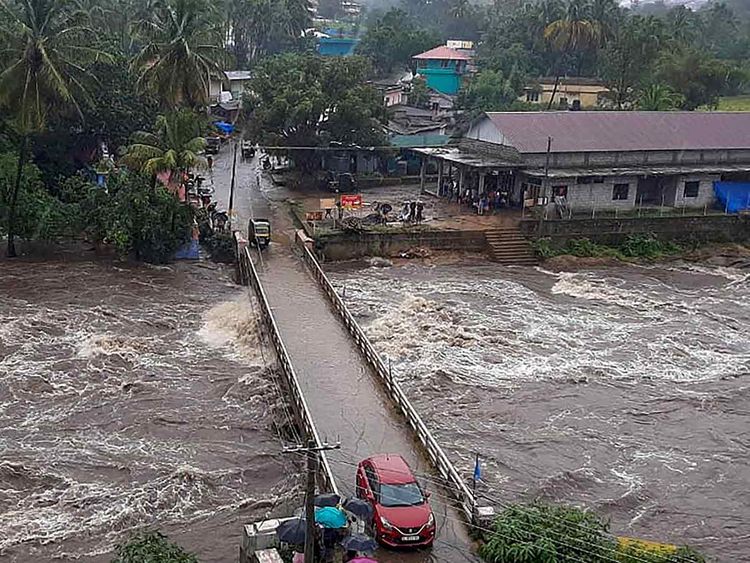 Thiruvananthapuram Aug 10: Incessant rain in Kerala have claimed 23 lives in the past two days. Over 22,000 people have been shifted to some 315 relief camps across the state, officials said.
Till late on Thursday the toll was eight, but a fresh count took the numbers to 23 on Friday. The worst affected districts include Malappuram, Kozhikode, Kannur, Wayanad, Kasargode and Idukki and the deaths have also been reported from these areas.

A massive landslip has been reported from Meppadi in the hilly Wayanad district where, according to a legislator, a temple, church, couple of houses and a few vehicles have come under soil and several people feared missing.

Chief Minister Pinarayi Vijayan, who chaired an emergency meeting this morning to take stock of the situation, said the state should be prepared for more downpour.

“Heavy rain has increased across most of Northern Kerala. The main threat will be across Nilambur and Wayanad.Red alerts have been issued for four districts. Were keeping a close eye on the situation,” Vijayan tweeted.

“We have requested more NDRF teams to be sent to the state. Already two teams have been sent to Nilambur and Idukki,” a CMO release said.
All exams by the Kerala Public Service Commission and various Universities across the state, scheduled for tomorrow, have been postponed, officials said.

Kalpeta MLA C K Saseendran said the place where the landslip happened was inaccessible due to other similar cave-ins along the road.
He said he had already requested the Chief Minister to seek the Army’s assistance for rescue operations.

“Landslide has happened at many places in Wayanad district. We came to know that a temple, a church, couple of houses and a few vehicles were hit in a massive landslide.

The trouble with that place is that it’s quite inaccessible.I am trying to reach there….The roads are blocked due to landslips. We are worried. We are not able to share much details due to lack of information,” the MLA said.

The state government has sought the help of Army and the National Disaster Response Force (NDRF) for rescue operations.

According to disaster management authority sources, three people from Idukki, one each in Kannur, Palakkad and Thrissur and two in Wayanad died in rain related incidents Thursday.

A one-year-old girl child was among the dead.

Barring Thiruvananthapuram and Kollam districts, educational institutions will remain closed in rest of the 12 districts on August 9 following heavy rains.

Besides road transport, train services were also disrupted across the state with most of the trains getting delayed by nearly five hours.

According to disaster management authorities, 13 NDRF teams would be deployed for rescue operations and five teams are already out on the mission.

With this, the toll has risen to 36 since the onset of the South West Monsoon on June 6, which arrived a week late.

Official sources said 156 relief camps have been opened across the state.
The state government has asked tourists not to travel to high range areas including Idukki while restrictions have been imposed in Ponmudi, a hill station near here.

The popular forest tourist destination of Gavi in Pathanamthitta district has also been closed due to incessant rains.

The water level is rising in most rivers and dams with Kannur, Wayanad, Idukki, Malappuram, Kozhikode and Kasaragod districts facing a flood-like situation.

Major rivers like Manimala, Meenachal,Moovattupuzha, Chaliyar, Valapattanam, Iruvazjinjpuzha and Pamba are in spate.

A large number of houses were damaged in heavy rains and strong winds which lashed the state since Wednesday.

Nilambur, a major town in Malappuram district, has been flooded and isolated, with water level rising up to the first floor of many a building.

Only roofs of shops and houses could be seen in many parts of the submerged town, where people were seen using country-made boats and large metal cooking vessels to row to safety.

Parked cars and other vehicles were submerged and nearly 200 families have been shifted to 10 relief camps.

In high-range Wayanad, which had witnessed heavy loss in the August floods last year, 87 relief camps have been opened and over 6,100 people have been shifted.

A landslide was reported from Chappamala at Iritty taluk in Kannur district.
Around 50 families have been evacuated from the taluk, where most places are submerged, since Wednesday night.

Munnar, a high range tourist destination in Idukki district, has been receiving heavy rain with the IMD recording 19.4 cm rain as per the latest report.

Widespread landslips were also reported from across the district with most major roads getting blocked and Marayur, the sandalwood forest reserve, almost being cut-off from the mainland.

People living on the banks of river Periyar including Aluva, have been asked to be more vigilant as water level was rising due to heavy rains.

Water has entered the famous Shiva temple situated on the banks of the Periyar, authorities said.

During last year’s flood, many areas in Aluva were cut off from the mainland.

Reports from Kottayam district said many areas including Pala, Erattupetta and Mundakkayam are under flood threat.

Over 400 people were killed and lakhs displaced in the August deluge last year, the worst in the state’s history in a century.