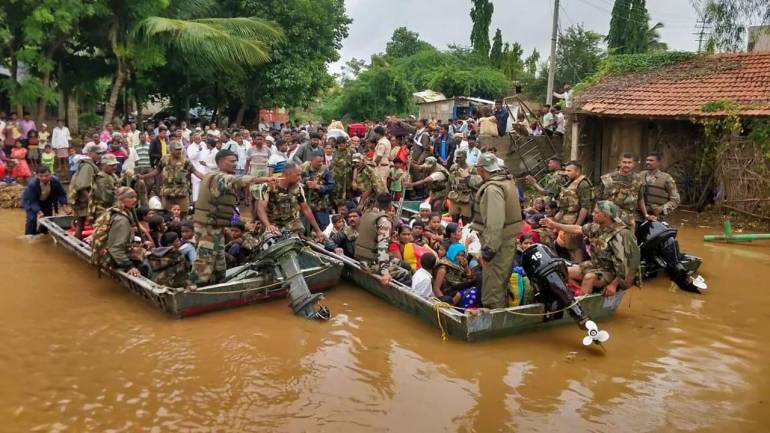 Thiruvananthapuram Aug 12: After pounding Kerala for days, rains abated on Sunday even as the death toll in themonsoon fury mounted to 60 with over 2.27 lakh people being sheltered in relief camps across the state.
Chief Minister Pinarayi Vijayan held a meeting with senior officials on Sunday morning to review the flood situation and later told reporters that the death toll in rain-related incidents since August 8 has touched 60.

About 2.27 lakh people have been shifted to 1,551 relief camps, he said.
Vijayan said even though the rains have subsided in the state, people should remain vigilant.

“There is respite from the rains today in the hills. But we need to be cautious. It’s not easy to escape from landslides,” he added.

Vadakara in Kozhikode district recorded 21 cm of rainfall, the highest in the state as of 8.30 AM Sunday, followed by Kodungallur in Thrissur (19.9) and Perinthalmanna in Malappuram (13.8), the IMD said.

Vijayan also said the water level in the major dams was not a cause of worry as of now. The Idukki Dam, one of the biggest in the state, presently had only 36.61 per cent of its capacity, he added.

In the worst-hit Puthumala in Wayanad, which was struck by a massive landslide on August 8, Vijayan said eight people were still missing and search operations were on for them.

Congress leader Rahul Gandhi arrived on a two-day visit to Kerala this afternoon and would visit his Lok Sabha constituency Wayanad, which is among the badly affected.

He is expected to visit relief camps at Kottakal in Nilambur, Mambad, Edavannappara and attend a review meeting at the Malappuram collectorate, Congress sources said.

Gandhi will visit the affected areas in Wayanad on Monday. Flight operations from the international airport at Kochi resumed on Sunday afternoon, two days after it was shut due to inundation of the runway area following heavy rains.

The Abu Dhabi-Kochi Indigo flight touched down at around 12.15 pm, marking the resumption of the operations, the Cochin International Airport Limited (CIAL) official said.

Seven trains have been paritally cancelled and two trains diverted, it announced.

Various agencies, including the Army, Navy, Coast Guard, NDRF, police force, volunteers and fishermen are involved in the rescue operations at various places.

This is the second consecutive year that the floods and landslides have ravaged Kerala which is yet to recover from the devastating deluge that claimed over 400 lives last year and had rendered lakhs homeless.