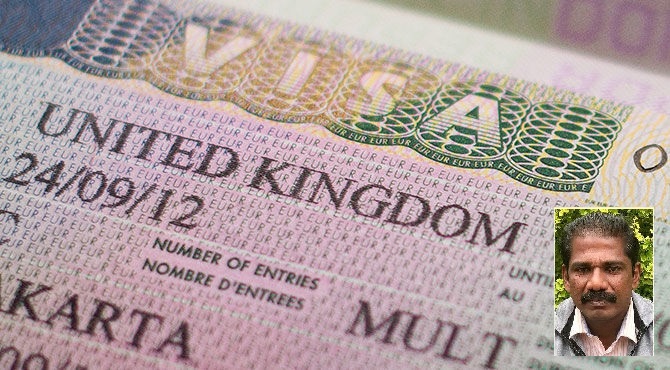 EAST HAM March 21: Rajeev Thankapan arrived in the United Kingdom on a visit visa from Thiruvananthapuram in Kerala in the year 2018. On March 2, 2019 reports came out that he was found dead at the place of his residence in Sibley Grove in East Ham. The police believe that Rajeev was dead several days before he was found.

According to sources Rajeev was renting a place at this address and doing some labourer jobs which involved building works and constructions.

Questions were raised when it came to light on why a person on visit visa was doing work in the UK when it’s illegal to do so. Further investigations revealed that although Rajeev arrived on a Visit Visa, his intentions were to find a living in the UK.

On speaking to sources in East Ham it was revealed that Rajeev spent lakhs of rupees back home to obtain this Visit Visa which he hoped would help him to find a cash-in-hand work and look after his family back in Kerala.

It is alarming that there are Malayalees still out there in Kerala thinking that migrating to the UK to get to do cash-in-hand job is easy. It also comes at a time when immigration rules have been tightened and the country is reeling under recession when even the legal migrants are struggling to keep ends meet.

Like any other deaths Rajeev’s death was too taken under the humanitarian consideration by the Malayalee community without looking into what his visa status was.

A UK online newspaper charity did raise a big amount for the family alongwith the National Council of Kerala Hindu Heritage UK and various other organisations chipping in with whatever they could to help the family.

The Indian High Commission in London and the NORKA organisation back in Kerala too have got involved without looking into any legality of Rajeev’s status and they are helping the body to be repatriated back to Kerala.

Following Rajeev’s death the community got engaged and the official government departments have got involved under the humanitarian cause.

But where is the sponsor for Rajeev Thankappan in the UK? What has he done to get the body repatriated. What compensation will he provide the beareaving family?

It is nearly three weeks since Rajeev was found dead and the body is still yet to be repatriated. Information received from sources in East Ham says that there was an individual in the forefront to get the official documents ready for the body to be repatriated.

However, it seems that the individual was working with the time he had available and was doing his best possible.

With a complicated case like this it would have been wise for an organisation to have got involved from the beginning.

Reports being received now say that Malayalee Association of UK (MAUK) is involved and documents are being processed and more liaison is happening between the NORKA organisation in Kerala and the Indian High Commission in London.

Latest reports received by this website says that the Indian High Commission has now approved £3,200 for the body to be repatriated and if all goes well according to plan the body will be flown to Kerala on Monday March 25, 2019.

To speed up the whole process MAUK has paid the deposit to the funeral directors to collect and prepare Rajeev’s body for repatriation to Kerala.

The death of Rajeev comes as a wake up call to those thousands back in Kerala looking to come to the UK using illegal means. UK has a weather which is mostly cold and wintry and someone from Kerala would not be able to sustain this if they are looking to do an outdoor job.

The rent for properties are too high and majority businesses will not employ illegals due to the severe penalty they have to pay if caught. Immigration officers are constantly on the lookout and if caught will be deported immediately.

Please be aware that due to terrorism threats the chances of an illegal getting caught are too high.

Most visa overstayers get paid around £3 per hour which is not enough for food or accommodation cost. The agents who bring people over often lie about living standards and how much money they can make by converting sterling pound into rupees.

Most people will not make the amount they paid their agents before getting caught and deported by immigration authorities.

The UKBA site provides information on how to come to the UK through proper means. Click to visit the website

This trend in illegal immigration within our community will also harm the new generation of migrants who are settled here. The UK will implement more stringent immigration rules and laws as a result of such unscrupulous actions.

This will make the life of immigrants here a hell without being able to bring in any of their relatives on visit visa of a genuine nature. Therefore, its time to put an end to such illegal practices which will put those coming to the UK and also those here at risk.