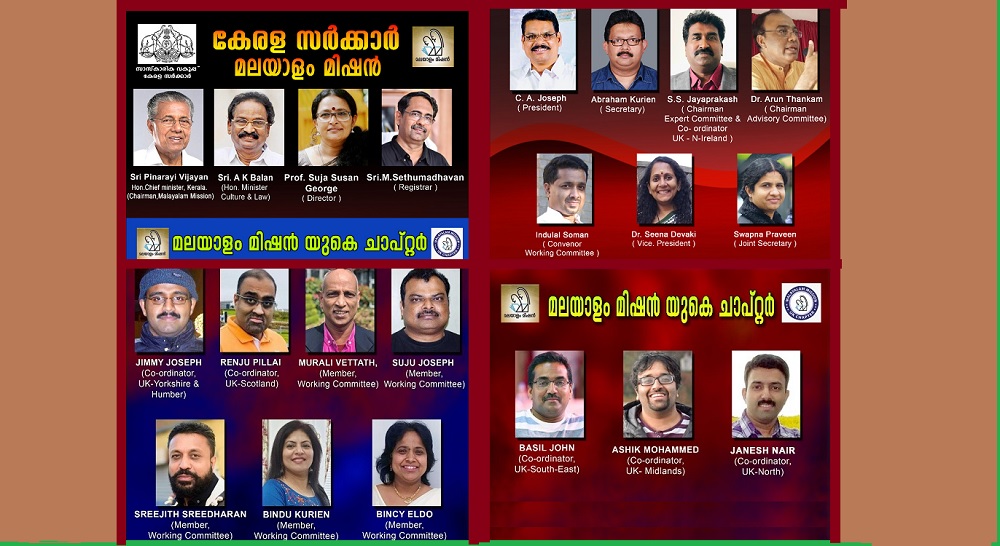 The expert committee comprising eminent cultural activists and language lovers will be chaired by SS Jayaprakash. There is also a 10-member Advisory Committee headed by Arun Thankam.

A 16-member working group has also been set up, including Jimmy Joseph, Bindu Kurian and Bincy Eldo, who work for socio-cultural and for the promotion of mother tongue in the UK.

CA Joseph, who has an active presence in the UK arts and culture scene, is also the Patron of the UUKMA Samsarika Vedhi. CA Joseph is a brilliant speaker and organizer of the ‘Let’s Break It Together’ concert, which was organized by UUKMA Cultural Forum in honor of health workers around the world during the recent lockdown.

CA Joseph is a member of the editorial board of Jwala Imagas, which publishes every month under the leadership of UUKMA, and has been the Convenor, General Convener and Vice Chairman of the Arts Department of the Cultural Forum, and the Program Coordinator of the London Malayala Sahitya Vedhi.

He has also acted in the critically acclaimed films ‘Summer in Britain’, ‘Celine in Memories’ and ‘Oru Bilathi Pranayam’. CA Joseph holds a Masters Degree in Economics from the University of Kerala and a Higher Diploma Course in the Kerala State Cooperative Union, HDC. He lives with his family in Guilford, near London.

Abraham Kurian, who was selected as the East and West Midlands Artiste at the UUKMA Arts Festival, is an excellent organizer and orator. Before coming to the UK, he was an official in the Kerala Forest Department.

SS Jayaprakash, who is also the Northern Ireland Coordinator, is the Chairman of the four-member expert committee set up to submit guidelines for the creative work of the Malayalam Mission UK Chapter. SS Jayaprakash is a well-known art and culture activist who is also the director of Karma Kalakendra, a leading arts and culture movement based in Northern Ireland. Jayaprakash has been the former National General Secretary of Sameeksha and the former Union Chairman of Baselius College, Kottayam.

Leading cultural activists and writers Prof. Meera Kamala, Lins Ayyaneth and Regina Varghese have been selected as members of the expert committee. Regita Shibu is a special invitee on the Expert Committee.

Dr. Arun Thankam, Head of the Department of Economics and Global Development, University of Sussex, is the Chairman of the Advisory Committee, which is made up of talented people working in various fields to provide guidance for the smooth functioning of the Malayalam Mission UK Chapter Working Committee.

Indulal Soman is the working committee convener. Indulal Soman, who was a prominent literacy activist in Kottayam district with a 100% literacy rate, was also a former National Committee member of the review. Indulal Soman, a well – known cultural activist and Malayalam language propagandist, lives with his family in Woking, London.

Dr Seena Devaki, a child psychologist at Sheffield NHS Hospital, is the Vice President of the UK Chapter. The joint secretary is Swapna Praveen, national president and former serial actress and writer of Sameeksha, a progressive cultural organization.

The Malayalam Mission, under the Department of Culture, Government of Kerala, aims to bring the new generation of expatriates into the culture and language of Kerala, spread across 42 countries outside India and 24 states outside Kerala. The activities of the Malayalam Mission Chapters are being carried out in collaboration with the Pravasi Malayalee organizations around the world.

Malayalam Mission conducts courses in four phases. These courses are named after the flowers of Kanikkonna, Suryakanthi, Aambal and Neelakurinji. Upon completion of the fourth course, Neelakurinji, the learner becomes equivalent to the tenth standard class in Kerala.

As Malayalam is the official language of Kerala, candidates who have completed the Malayalam Mission course can also apply for the written examinations conducted by PSC for employment in Kerala. Today, expatriate Malayalees have realized the need to learn and speak their mother tongue.

The present Registrar of the Malayalam Mission is M. Sethumadhavan, Head of the DIET, which trains school teachers in Kerala. M. Sethumadhavan holds an A Plus Diploma from the National University of Educational Planning and Administration (NUEPA) under the Department of Human Resource Development, Government of India.

He is also the State Level Resource Person for the State Council of Educational Research and Training (SCERT) Center. Known as a leading lecturer with long experience in the field of teacher training, M Sethumadhavan is well known to all teachers in Malayalam Mission Chapters through teacher training.

The Working Group is working to launch the Learning Festival April 2021, an evaluation program for well – run schools in the UK. The Working Committee requests the support of all UK Malayalees for all the activities of the Malayalam Mission UK Chapter to pass on our mother tongue and cultural heritage to the new generation, regardless of caste, creed or political affiliation.