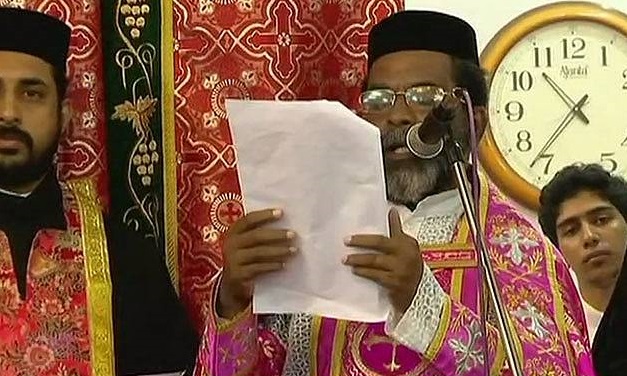 KOCHI Aug 6: The protests by churchgoers in Kerala against the women’s panel’s recommendation to stop confessions continued today at the Malankara Orthodox church.

The proposal is against the “spirit of ancient Indian culture and rich values, which respect all different religions and faiths,” said Father George Abraham.

“We request the Government of India to reject this unilateral, immature proposal of the National Women’s Commission which is against the Spirit of religious freedom as envisaged in the constitution of India,” read the resolution of the church.

The resolution has been adopted by over 2,000 Orthodox churches – including 30 diocese across India and abroad — church sources said.

“In practice, when we see such statements, we are tempted to suspect a hidden agenda and this is what we want to bring out in open to people concerned,” Archbishop Susa Pakiam, representing the  Kerala Catholic  Bishop’s Conference, told mediapersons earlier.

Leaders of the Catholic church have also criticised the recommendation of the National Commission for Women, saying it is a direct infringement on the freedom of religion.

The women’s commission made the recommendation last month after a number of woman alleged rape and sexual abuse by priests and church officials.

One of the cases were linked to confessions and one, where the woman alleged years of sexual abuse, involved the Malankara Orthodox Syrian Church.

In their report, the women’s commission recommended that the government should intervene and abolish the system of confession as it puts at risk the safety and security of women.

After inquiring into the incident, NCW chief Rekha Sharma said “there must be many more such cases” of priests pressuring women into telling their secrets and recommended abolishing the practice across the country.

“No one can tell us not to confess,” Father Reji Luke told NDTV. “To practice our religion, is our constitutional right. The statements, like the ones made by National women’s Commission, are unprecedented and unacceptable,” he added.

Last month, three women accused priests of sexual abuse, which, they said, went on for years. They also alleged that the Church, instead of impartially investigating the incidents, have been trying to cover up the matter.

Over the last year, more than a dozen priests have been arrested from different churches in Kerala for allegedly sexually abusing and raping minors.