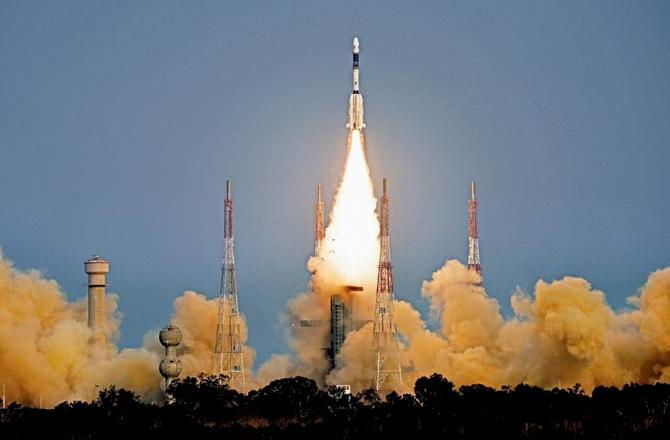 It is the 44th launch of the Indian rocket the Polar Satellite Launch Vehicle (PSLV) at Sriharikota, India’s rocket port on the coast of the Bay of Bengal in Andhra Pradesh.

This is a fully commercial launch by ISRO where the whole rocket has been hired by an overseas company. India’s workhorse rocket the Polar Satellite Launch Vehicle (PSLV) is on its 44th mission and a lighter version of the PSLV is being used.

No Indian satellite is being launched as this is a fully commercial launch contracted through Antrix Corporation Limited ISRO’s commercial arm.

At Sriharikota on Sunday, India’s rocket port was buzzing with activity as ISRO prepared to orbit two British satellites. Describing it as a “fully commercial launch by ISRO”, Dr S Somnath, Director of the Vikram Sarabhai Space Centre, Thiruvananthapuram said “India will earn money by this launch”.

Mr Somnath explains “this is fifth fully commercial launch of PSLV where the whole rocket has been hired by a foreign company”. He says “PSLV has a very special slot hence foreign companies prefer it because it is highly reliable and India’s offers timely launches without much of a waiting period”.

It was launched at night as desired by the British company as it seeks a specific orbit for its satellites that could be got only if the rocket was launched at this hour. Till date there have been only three night launches from Sriharikota.

The British satellites are made by Surrey Satellite Technology Ltd, UK and they together weigh 889 kilograms. NovaSAR satellite has day and night viewing capability for resource mapping, disaster management and ship detection. S1-4 satellite is meant for environment monitoring and urban management.

NovaSar is equipped to track ships in high seas and if used effectively it can detect unauthorised boats sailing the seas since each ship is supposed to carry equipment by which it can be identified by security agencies using satellite based tracking systems.

In fact if such a system were widely prevalent the illicit boat by which Ajmal Kasab and his team of terrorists who attacked Mumbai in 2008, could well have been detected as they were sailing towards India. India also has a satellite based ship tracking program called Automatic Identification System that operated on ResourseSAT-2.

For this launch the PSLV weighs 230 tons at lift off, standing tall at 44.4 meters, and the lightest version of PSLV is being deployed, called ‘core alone’ version. Out of 43 launches only twice has the PSLV failed, this is a good success rate.

Mr Somnath, who works at India’s main rocket lab, said this launch is good for the country as it brings in revenue and gives the Indian industry a boost. Today 85 per cent of PSLV is made by the industry and ISRO wants the industry to take up making the balance 15 per cent as well.