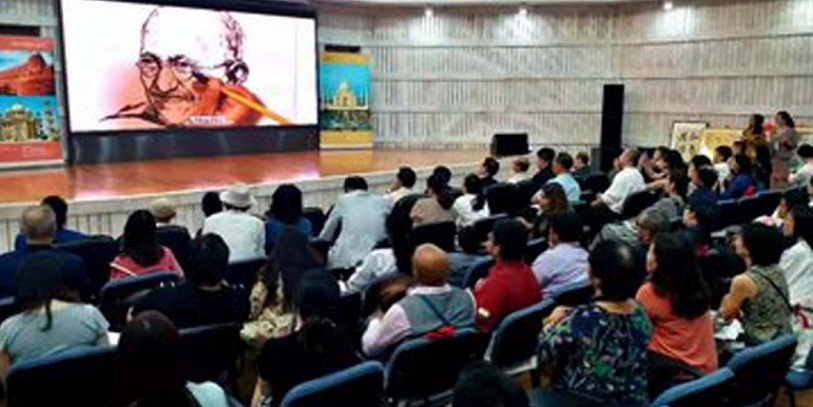 Beijing Oct 3: The celebrations of Mahatma Gandhi’s birth anniversary, which is held every year since 2005 at a public park in Beijing, was shifted to the Indian Embassy premises at the last minute on Wednesday after the Chinese government denied permission to hold the event, Indian Embassy officials in Beijing said.
However, no explanation was given by the Chinese authorities as to why the permission was not given, they said.

For the last 14 years, Gandhi Jayanti celebrations were being held at the picturesque Chaoyang park after a statue of India’s Father of the Nation sculpted by famous Chinese sculptor Yuan Xikun was installed there in 2005.

The popular public park has the only sculpture of Mahatma Gandhi in China.
Every year the Indian Embassy along with Yuan, who is also the curator of the Jin Tai art museum located in the same park, has been organising the October 2 event with Chinese school children reciting the Mahatma’s famous quotes and Indian community members singing Gandhi bhajans.

Surprisingly, this year the permission was not received even though it was applied well in advance like every year, the embassy officials said.
The event was shifted to the embassy auditorium after the museum informed the Mission that the event cannot be held in the absence of the permission.

The embassy officials who were surprised by the denial had to make alternate arrangements in a hurry to shift the function to the embassy premises, they said.

The sudden deviation from the tradition comes at a time when President Xi Jinping is likely to visit India later this month for an “informal summit”. Neither New Delhi, nor Beijing has officially confirmed the summit, its dates or the venue.

Meanwhile, Indian Ambassador to China, Vikram Misri, addressed the event held at the Indian Embassy to mark the 150th birth anniversary of the Mahatma.

Later in the evening, Misri felicitate 13 Chinese artists from the China Artists Association who painted Mahatma Gandhi’s portraits, unveiled by the diplomat, as part of the event.

For decades Mahatma Gandhi, a contemporary of Chairman Mao Zedong who led China’s national liberation movement, has remained an enigma in China as the two leaders professed contrasting political philosophies.

While Mao remained a firm advocate of violent liberation movements with his famous dictum that power flows out of barrel of the gun, Mahatma Gandhi’s successful non-violent movement against British, in contrast struggled to catch the attention of Chinese.

But Mahatma Gandhi’s first non-violent movement in Africa has a Chinese link. Over a thousand Chinese took part along with Indians in the protest led by Mahatma Gandhi against the racist Asiatic ordinance brought about by the Zanzibar government in 1906.

This was Mahatma Gandhi’s first movement based on the idea of non-violence as an alternative to armed violence to bring about political change, veteran Indian historian Ramachandra Guha said during his visit in Beijing in 2013.

For decades, Mahatma Gandhi and his legacy stayed in the shadows as Mao remained at the helm till his death in 1976.

According to the survey carried out by state-run Global Times in 2009, about 60 most foreign leaders who influenced China, Rabindranath Tagore and Jawaharlal Nehru figured from India while Mahatma Gandhi’s name was conspicuously absent.

But Mahatma Gandhi seems to be striking chord with modern China as his name now figures high among the “well known Indians in China”, according to an online survey carried out among the Chinese netizens by the state-run China Plus.

The name of Mahatma Gandhi figured higher than Tagore, Nehru and Aamir Khan, who in recent years has become a household name after success of several of his films in China starting with ”The Three Idiots”.

Experts say Mahatma Gandhi’s ideology such as devotion, self-control and self-motivation have many similarities between the philosophies advocated by ancient Chinese thinkers like Confucius, Mengzi, Laozi and Zhuangzi.