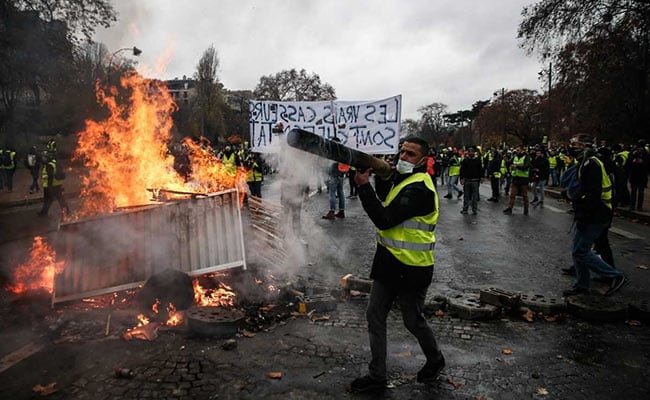 KATOWICE: France said Monday at the UN climate talks it fears certain countries will exploit the “yellow vest” protests to curb their ambitions in the fight against global warming.

The “yellow vests”, clad in the luminous safety jackets carried by law in all French cars, began slowing or blocking traffic on roads around France last month in protest against anti-pollution fuel tax hikes.

The demonstrations have  snowballed, leading to calls to topple French President Emmanuel Macron, accused of favouring the rich.

“It would be dangerous to blame the environment for this entire crisis. It’s a broader political, economic and social problem,” said Brune Poirson, French secretary of state for ecological transition.

She spoke to reporters on the margins of the UN climate talks in Katowice, Poland, adding that she was notably there “to help countries decode” the situation in France.

“The ‘yellow vest’ movement is much broader and goes way beyond the single issue of ecological transition, so I believe one should not conflate things,” Poirson said.

“The risk is that other countries… will use what happened in France and reduce it to a question of ecological transition and a poorly received carbon tax in order to also curb their ambitions regarding the climate.”

Conceding the need to figure out a way to transition to clean energy “in the fairest way possible”, Poirson said “the end goal remains the same, namely to get over our oil dependence and speed up the ecological transition”.

Officials from nearly 200 countries are meeting in Katowice until the end of the week to try to flesh out the promises agreed in the 2015 Paris climate accord.

The Paris deal saw nations agree to limit global temperature rises to below two degrees Celsius (3.6 Fahrenheit) and under 1.5C if possible.

The UN’s expert climate panel in October warned that fossil fuel emissions must be halved by 2030 to have any hope of reaching the 1.5C goal by the end of the century.

US President Donald Trump on Saturday cited the French protests as proof that he was right to reject the Paris agreement on fighting climate change.

“Maybe it’s time to end the ridiculous and extremely expensive Paris Agreement and return money back to the people in the form of lower taxes?” Trump tweeted.

Polish President Andrzej Duda for his part said: “We can’t enforce climate policies that go against the will of the people.”