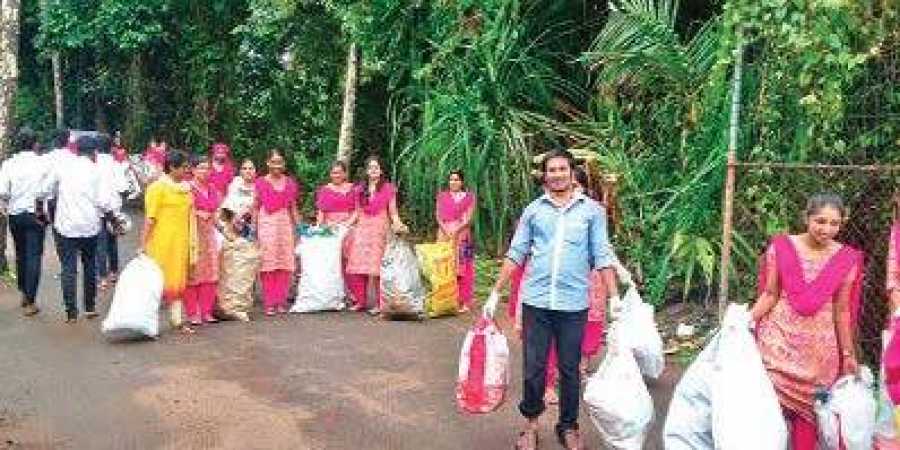 KOCHI July 26: When the 100 students of Sahodaran Ayyappan Memorial College of Education in Poothotta, Kochi, walked out of their institution, they knew it was about time to change the world of its corrupt ways through small steps.

And they did. In their corner of the world, these future teachers, backed by their faculty, collected plastic waste from the neighbourhood to get rid of this polluting menace, Indian Express reported.

Now, equipped with the knowledge to tackle the waste problem, the students and the college’s nature club ‘Eco Local Action’ (ELA) will organise an exhibition to spread awareness about the same on July 27.

On June 5, following the United Nations’ theme for the year ‘Beat Plastic Pollution’, the students of the teachers’ training college went to over 300 households and shops in the area to spread their knowledge about the cons of plastic accumulation.

“The students, in association with ELA, were divided into five groups,” said Rajini G, nature club in-charge. “Along with visiting these houses, we distributed saplings and planted it in respective compounds. We asked the people to gather plastic waste separately.”

Three weeks later, the students visited the households to collect the gathered waste. “Some households had collected the waste just as we asked them to,” said Rajini. “However, some thought the students were not serious about the initiative. We went back to those people. On the other hand, there was an enthusiastic few who brought the collected waste to the college.”

After the waste was collected, it was segregated into recyclable and non-recyclable, and sold to two agencies. “There is no adequate mechanism here to tackle the waste problem,” the teacher-in-charge says. “To collect the waste, one has to give money to the Kerala Suchitwa Mission (KSM) which is quite inconvenient. So the money we got from selling waste was donated to KSM to develop necessary arrangements.”

The initiative, known as the ELA model of elimination of plastic, was led by teachers Rajini and Jyothi K R and students Vinu Sreedhar, Albin Babu, Arun Ajay and others. According to Rajini, the initiative was developed in such a way that panchayats can also adopt it.

The ultimate aim of the initiative is to bring about a plastic-free culture. “It is not an easy task,” she said. “That is how we realised if anyone can spark of change, it is us because these students will be teaching the future citizens of the country in no time.”