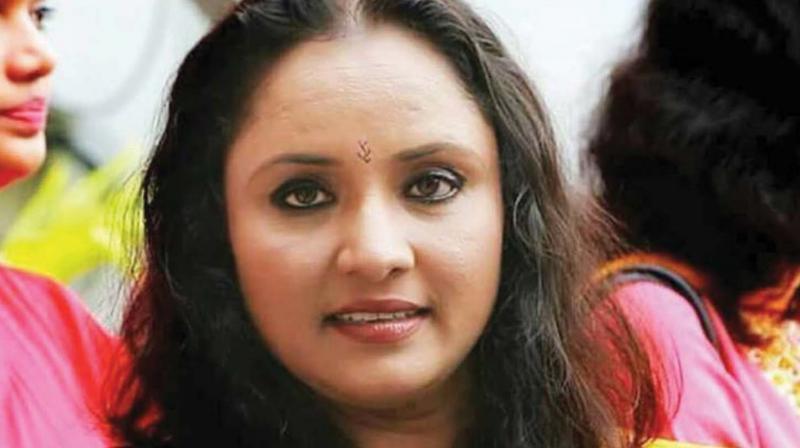 KOCHI July 10: The Malayalam film industry has been experiencing turbulence over the past one week after the actor guilds AMMA and WCC got into a headlock following the re-induction of Dileep in the former’s latest general body meeting.

Close on the heels of that, the film and serial industries received another shock when state award-winning actress Nisha Sarangh, popular as Neelu from the highly-rated sitcom Uppum Mulakum of Flowers TV, alleged harassment at the hands of R. Unnikrishnan, director of the series on the sets.

Nisha also claimed that the director ousted her from the serial without citing any reason. Explaining the incidents over a telephonic interview, Nisha says, “This started long back. He used to behave badly from the start.

It was the worst behaviour women can expect from certain men. I made my point clear that I really disliked his behaviour, but he continued to pester me. So when his advances were rejected, he got annoyed and started calling me grimy words.

That was too much of an insult.” She then complained to R. Sreekandan Nair, the head of Flowers TV. “The director was warned as a result. However, his grudge elevated and he continued to abuse me,” she says.

She alleges that the harassment was not confined to the sets alone. He used to send her inappropriate messages on phone, but she always refused to respond. “This made him more infuriated and the abuse continued.” “Everyone on the sets knows about his behaviour. He always insulted me and several times, I broke down during the shooting.

Artistes like Biju Sopanam had warned him many times about his behaviour, but he never paid heed to it. He uses indecent language with every artiste. I’ve never seen such a person who disrespects others. Every day he comes to the sets in an inebriated condition,” she adds. She also says that this is not the first time an actress was facing his wrath. An actress who worked with him previously had similar experiences.

“Six months ago, his attitude towards me slightly changed after one of the artistes complained about him to the channel head. He wasn’t expecting it and again he was warned. He was scared that I’ll also do the same thing,” she accuses.

Things got worse when Nisha went to Qatar and the US, where she represented team Uppum Mulakum, which was honoured there. She says, “He was really upset by the fame I was getting there. Since I was rejecting his advances, he always nursed exasperated feelings. Last month, I flew to the US for NAFA Awards with the permission of the channel head and the director. But when I was back, he had told everyone on the sets that I had gone without his permission; I was expelled from the series. Acting is my profession and my source of income. I tolerated all this insult for my family, for my daughter’s wedding and finally, I’m treated like this. At one stage, he even used my personal life to confront me, trying to portray me in a bad light,” she claims.

Nisha would love to be back in the sitcom, which has completed over 650 episodes, but has made her stance clear that the director should be removed. She won’t be acting in the serial again if the channel decides against her stand. She has been getting tremendous support from the film and serial industry, including the Women in Cinema Collective (WCC). “I have informed AMMA and Association of Television Media Artistes (ATMA) of the issue and they have extended full support,” she adds.

Flowers TV issued a statement on Sunday evening saying that the issue was being considered seriously and Nisha would continue to be a part of the sitcom. “Yes, even I heard it. But my stance is unchanged and they said the director would be changed. I believe the words will be put into action. I’ll be joining the sets after two days and then only can I confirm whether he’s removed,” concludes Nisha. When asked about the issue, director Unnikrishnan responded that he didn’t wish to comment now and said channel head Sreekandan Nair would respond. However, Nair too couldn’t be reached for comments.

In a Facebook post, WCC has offered unconditional support to Nisha Sarang and said the collective is in an effort to set up an intertnal complaints committee to legally handle complaints raised by women in the film industry. “We are with this actress too. Our struggle is for each actor who has been assaulted, to bring about a workspace where no one is abused. Police are responsible to take suo motu action by registering a case in the wake of the allegations made by the actress. Both the elected representatives and the organisations she represent, and we too, have the responsibility to question injustice. We will stand by each woman who is being attacked,” a part of the post reads.