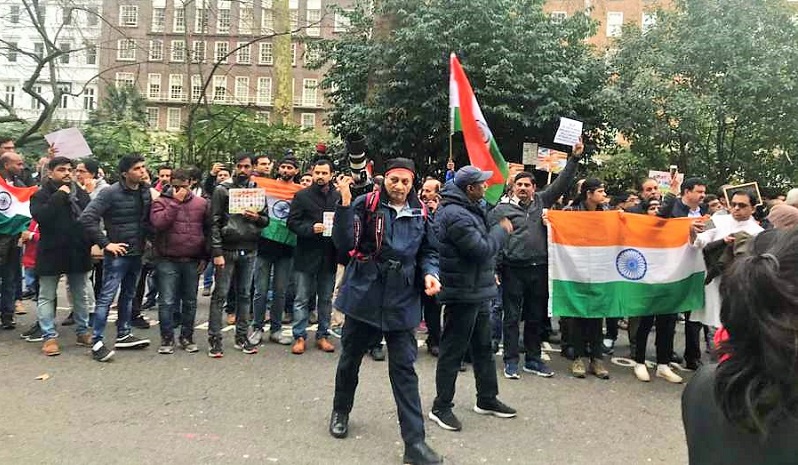 LONDON Feb 17: Hundreds of Indian students and the Indian community from different walks of life in London took to the streets to protest the terrorist attack that killed 40 Indian Central Reserve Police Force jawans on February 14.

Reports said that the nefarious act was carried out by banned Pakistani terror organisation Jaish-e-Mohammad (JeM) which is lead by Pakistan-based Muslim cleric Maulana Masood Azhar. He founded the group after he was released by India in 1999 in exchange for the crew and passengers of an Indian Airlines plane hijacked and flown to Taliban-ruled Afghanistan.

He appealed to the British Parliamentarian to stop sympathising with terrorists.

“There is no room for terrorism in British soil,” said Manoj. “Jammu and Kashmir is an integral part of India and it will remain as same.” Indian Students Association had called all to join the protest with a notice on their Facebook page:

“We stand against terrorism all across the globe. Join us for a silent protest in showing our strength, support and solidarity outside the Pakistani High Commission on 16th February Saturday, from 2:30 pm -4pm.

*DOS*
?Please promptly turn up at 2.30pm at Pak High Commission for briefing
?Please wear white and/or saffron with black band around arm
?Bring your own posters, placards, banners, slogans & Indian flags
?Carry your own water
?Carry your own candle and match stick/lighter
?Pla get yr slogan approved by the team here to keep uniformity
? We will all light up our mobile torch too at some point to create impact and send strong message !!!
? Take full responsibility of your young children at all times and your belongings

*DONT’s*
? Don’t laugh or joke or go for coffee etc .. snacking away for the event for the whole duration of March and standoff
? DO NOT DRIFT away in smaller groups and stay close and connected with the group
? Don’t wear colourful clothes or make up etc