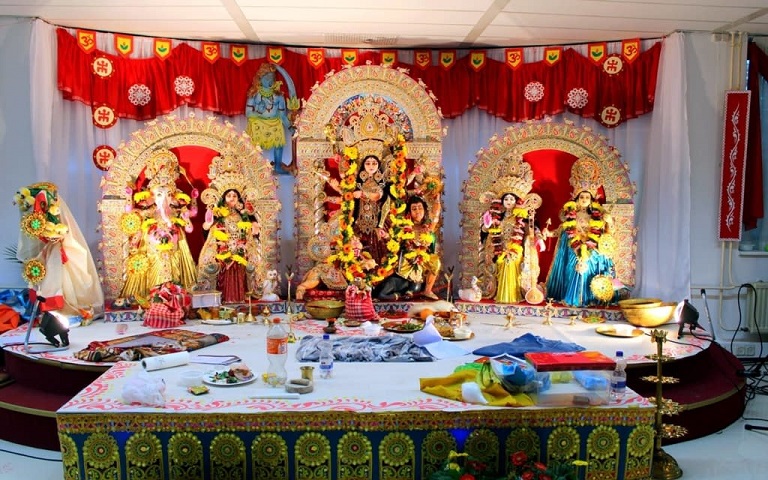 LONDON Oct 19: Numerous organisations across the UK are celebrating Durga Puja with elaborate festivities for the Indian diaspora this week as the festival gains increasing prominence in the country.

Hundreds of people are expected to descend upon the town halls and community centres around the country from Wednesday, which marks the festival of Ashtami.

Most of the festivities will spill over into the weekend beyond Navami on Thursday, or the ninth day of the fortnight-long celebrations, to attract larger family crowds.

The London Durgotsav Committee is marking 55 years of its Durga Puja in Camden, north London, around the theme of “Distant Durga”.

“The theme portrays a single-canvas collage of memories of long-left-behind and distant Kolkata, the City of Joy and the very different world of London.

This year we have shipped our new idol of Goddess Durga from distant Kumortuli in Kolkata,” said Mainak Roy, Trustee and Treasurer of the London Durgotsav Committee, which dates back to the 1960s.

It claims to be one of the very first organisers of what came to be known as Camden Durga Puja and this year the group plans to conclude its celebrations with a special Bijoya or Dussehra concert on Sunday.

London Sharad Utsav will mark their 10th anniversary of festivities at Ealing Townhall in west London with a modular Durga concept, which showcases various art forms from different regions of Bengal in association with the Bengal Heritage Project.

Among some of the other pujas planned during the week across London include events in Hounslow by Prabashi, with a Durga idol created by Prasanta Pal from Kumortuli – the area of Kolkata famed for its creative idols of the goddess.

Beyond the British capital, Milton Keynes Ananda Club will celebrate its 30th Durga Puja in the southern England region.

“The two prime aspects of Durga Puja are the authenticity of the puja itself, which is well taken care of by the women of 55 member-families, and the authentic and elaborate home-cooked food,” said Subir Chatterjee, Vice-President of the club.

The city of Bristol is also among those joining in the rituals, with traditional prayers to be held at the Bristol Hindu Temple.

It is coordinating its Durga Puja with Navratri celebrations, with a common kitchen serving fusion food from Bengal and Gujarat.

The Royal Berkshire Bengali Association, Indian Cultural Society of Cambridge and Basingstoke Durga Puja are among some of the other key organisations marking the occasion with decorations all the way from Bengal and authentic food of the region.