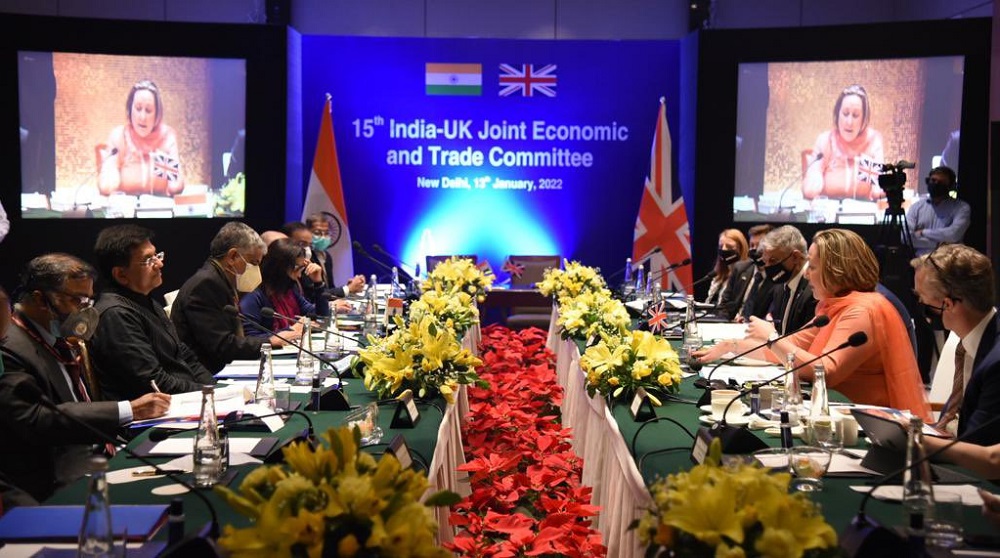 A free trade deal between the UK and India could bring huge benefits for Scotch whisky producers, as the UK Government looks to cut tariffs of up to 150 per cent

LONDON Jan 14: The UK and India have launched negotiations from yesterday on an ambitious Free Trade Agreement at an event in New Delhi.

International Trade Secretary Anne-Marie Trevelyan met with her counterpart, Indian minister of Commerce and Industry Piyush Goyal, to formally start talks on a deal that could create huge benefits across the UK.

India is one of the world’s biggest and fastest-growing economies and a bold new deal would put UK businesses at the front of the queue to supply India’s growing middle class, with Scotch whisky set to benefit. The UK Government is striving to slash duties of up to 150% on whisky exports, offering a boost to distilleries and the whole spirits industry.

Launching UK/India trade talks offers a golden opportunity to reach an ambitious tariff reduction in an early harvest deal that could grow Scotch Whisky exports to India by £1 billion over five years. Tackling the tariff and State level regulatory issues would open the market up to smaller producers who are effectively locked out by the substantial barriers to trade.

Improved market access for Scotch would enable an increasing number of Indian consumers to enjoy our premium product. It would also be good for our industry and Indian government tax revenues – a win-win for all.

On a recent visit to Mumbai, I saw first-hand how Scotland’s distilleries would benefit from the removal of tariffs as high as 150% on whisky. Our thriving services sector would also receive a welcome boost.

I look forward to talks with India progressing as we negotiate new global trading relationships for the benefit of people and businesses across the UK.

A deal has the potential to almost double UK exports to India, boost our total trade by as much as £28 billion a year by 2035, and increase wages across the UK by up to £3 billion. Investment from Indian companies already supports 95,000 jobs across the UK.

Thank you @PiyushGoyal for hosting our trade team in New Delhi, and sharing our enthusiasm to launch an ambitious deal that will be a win-win for our thriving economies 🇬🇧 🤝 🇮🇳 #UKinIndia @tradegovukIND @narendramodi @BorisJohnson https://t.co/q85g9D5ZkO

A deal with India would be a big step forward in the UK’s strategy to refocus trade on the Indo-Pacific, home to half of the world’s population and 50% of global economic growth. A new economic partnership with India, alongside UK membership of the massive Asia-Pacific trading bloc, CPTPP, will create a pillar in the region supporting free and fair trade.

Prime Minister Boris Johnson said: “A trade deal with India’s booming economy offers huge benefits for British businesses, workers and consumers. As we take our historic partnership with India to the next level, the UK’s independent trade policy is creating jobs, increasing wages and driving innovation across the country.

The UK has world-class businesses and expertise we can rightly be proud of, from Scotch whisky distillers to financial services and cutting-edge renewable technology. We are seizing the opportunities offered in growing economies of the Indo-Pacific to cement our place on the global stage and deliver jobs and growth at home.

International Trade Secretary Anne-Marie Trevelyan said: ”A deal with India is a golden opportunity to put UK businesses at the front of the queue as the Indian economy continues to grow rapidly. By 2050 India will be the world’s third largest economy with a middle class of almost 250 million shoppers. We want to unlock this huge new market for our great British producers and manufacturers across numerous industries from food and drink to services and automotive.

As an independent, deal-making nation the UK is broadening our economic horizons and forging stronger partnerships with the fastest-growing economies of the world. India marks the start of our ambitious 5-star year of UK trade and will show how the deals we negotiate will boost the economies across all nations and help level up all regions of the UK.

A UK-India FTA would bring multiple benefits including:

Playing a key role in our ambition to double trade with India by 2030 – supercharging the growth of our trading relationship which totalled over £23bn in 2019.

Levelling up the UK – DIT analysis shows a trade agreement with India could boost the economies of all nations and regions of the UK. Almost 30,000 people in the West Midlands for example were employed via Indian investment in 2019, and the region could see a massive boost of up to £300m with opportunities for manufacturers of motor vehicles and parts.

Investment in UK jobs – International investment from Indian companies already supports 95,000 jobs across the UK and could grow with a new trade deal.

Boost UK’s green industries – The Indian government plans to install 175 GW of renewable energy capacity by 2022 and much more in the coming decades. UK’s world-leading renewables industry looks set to benefit from a deal that slashes barriers – such as import tariffs as high as 15% on wind turbine parts from the UK.

The first round of negotiations is expected to start next week – making it the UK’s quickest start of formal talks between negotiating teams following a launch.

During her visit to India the International Trade Secretary will also co-chair a meeting of the UK-India Joint Economic and Trade Committee to review how businesses in both countries are benefiting from existing market access commitments under the UK-India Enhanced Trade Partnership agreed last May by the Prime Minister Boris Johnson and Indian PM Narendra Modi.