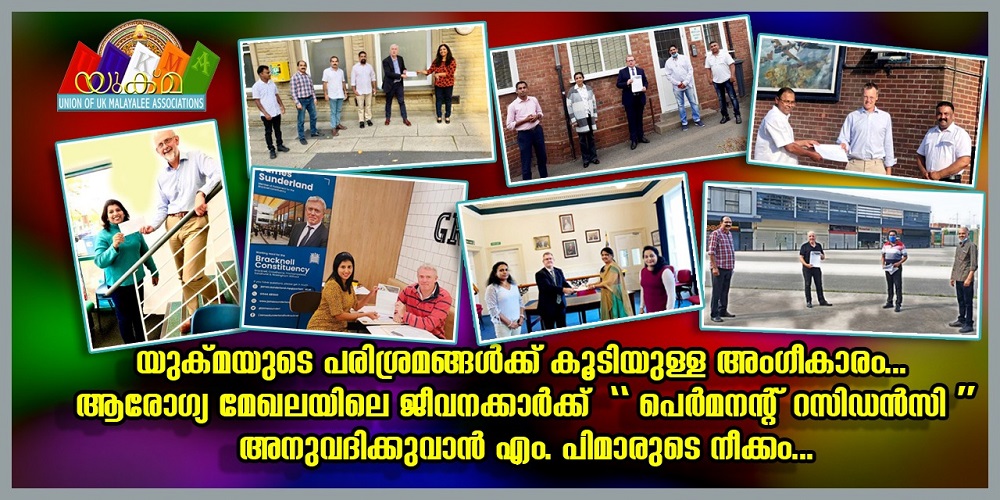 LONDON Nov 27: British MPs from various parties have come out to demand “automatic permanent residency” for health workers who fought alongside the country under the Covid-19 threat.

The petition, signed by 37 MPs from various parties, including the country’s main opposition Labour Party, has been submitted to Secretary of State for Parliamentary Affairs Jacob Reece Mog. It is also noteworthy that none of the ruling Conservative Party MPs signed the petition.

This is a promising move for health workers, including Malayalee nurses who have immigrated to the UK over the past five years. The UK Malayalee community is also looking at this in recognition of the efforts made by UUKMA over the past few months at the national level in protest of the British Government ‘s decision to neglect the nursing sector workers from the pay hike of public sector employees.

The campaign, led by UUKMA, was appreciated by MP and British Chancellor Rishi Sunak from Richmond, North Yorkshire.

The Boris Johnson government, which has announced revised pay for more than nine million other public sector workers, has launched a direct petition to members of the UUKMA British Parliament as part of its efforts to draw the attention of Parliament to the neglect of the one million nursing workers who fought for their lives in the Covid – 19 struggle.

In addition to effectively intervening in the issue of pay rises, immediate relief in visa rules should be granted to help thousands of nurses who arrived in the UK during the Kovid period bring their families and parents to the UK.

The UUKMA National Committee’s main demand at the time was to return the NHS surcharge levied on health workers and their families from 2015 and to convert the existing work permit into an “automatic permanent residency” in recognition of the Kovid struggle of the new generation of nursing staff.

The campaign, led by UUKMA, was attended by Malayalee health workers, including nurses from 480 different constituencies. UUKMA is credited with being able to petition 480 out of the total 650 MPs in the UK by those living in their respective constituencies.

UUKMA National President Manoj Pillai, General Secretary Alex Varghese and Campaign Manager Eby Sebastian thanked all those who contributed to this. It is with the co-operation of UUKMA’s National Officers, Regional Officers, Nurses Forum Leaders, other Organization Officers and Member Association Officers that so many MPs have been able to submit petitions to their voters through their Malayalee health workers.