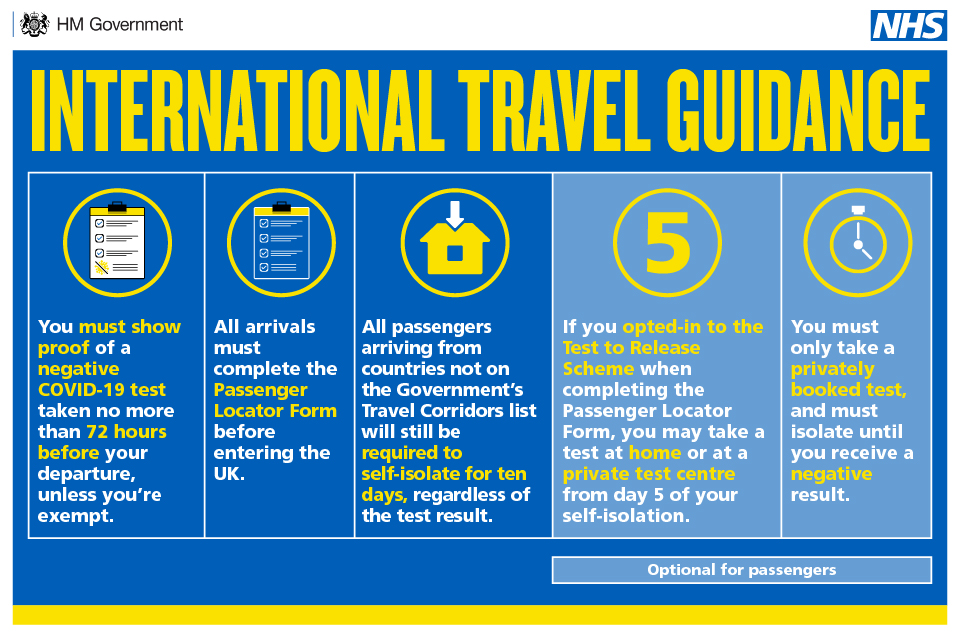 LONDON Jan 27: You can only travel internationally when you have a legally permitted reason to leave home, Home Secretary Priti Patel said. Declarations would be checked by carriers and there would be increased police at airports and ports, she added.

Work trips are allowed, so you will have to show some proof that your flight or sea crossing is vital for your employment. However, there are a range of other reasons for ‘essential travel’.

These are the same at the reasons for leaving your house: medical care, to escape harm, compassionate visits – for example a funeral – and weddings.

The list of travel exemptions will be urgently reviewed so that only the most important and exceptional reasons are included.

People are also advised to consider the public health advice in the country they are visiting before they go.

The Home Office said there will be an increased police presence at ports and airports fining those in breach of the stay at home regulations.

Priti Patel said: ‘Going on holiday is not a valid reason, so we will introduce a new requirement so that people wishing to travel must first make a declaration as to why they need to travel.

‘This reason for travel will be checked by carriers prior to departure.’ Travel operators are also expected to face fines if they fail to inspect these forms.

Lockdown rules already ban people from international travel unless it is for work. Leaving home is only permitted for a small number of reasons.

Under the lockdown laws introduced at the start of January and which will run until March 31, people in England are allowed only to leave the house for a very slim range of activities.

But the rules, which are largely the same as for the second lockdown in November, also ban foreign leisure travel, just as they prohibit domestic leisure travel.

It is not clear whether airlines and other travel operators will have the unilateral ability to decide whether someone has given a genuine reason for a trip on their forms, or it will end up being referred to police.

There will also be an increased police presence at ports and airports, fining those in breach of the stay at home regulations.

The Home Secretary lashed out at social media influencers who have been posting images of themselves in sunny parts of the world like Dubai during the lockdown.

Many have claimed they were travelling for work, but have attracted a backlash from people stuck at home after also enjoying the nightlife and beaches.

Ms Patel also singled out people ‘turning up with their skis’ at London’s St Pancras station to catch the Eurostar to European resorts, adding: ‘That is clearly not acceptable.’

Priti Patel said Britons returning from around 30 ‘red list’ Covid countries will be forced to quarantine in hotels for 10 days at their own expense.

Hundreds of arrivals each day are expected to be escorted directly from airports to rooms.

They will have to stay there for the duration of their isolation and pay a bill estimated at £1,500.

It will only affect British travellers, as foreign citizens who have been in the countries are already banned from entering altogether. It has not kicked in yet.