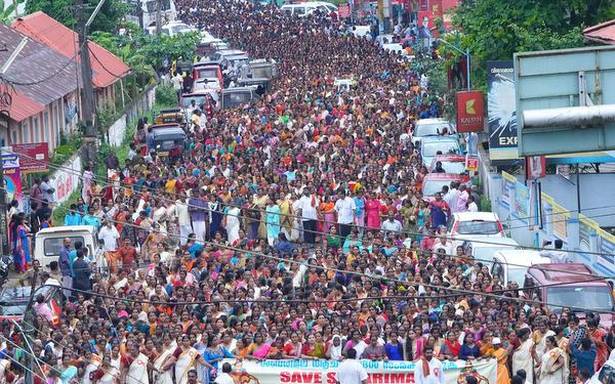 KOCHI Oct 4: Hindu organisations held marches and dharnas in different parts of Kerala on Tuesday to express their dismay at the Supreme Court verdict allowing women of all ages to offer worship at the Sabarimala Ayyappa temple.

The activists, rallying under the banner of Sabarimala Protection Council, blocked traffic in Kochi and Thiruvananthapuram, resulting in mild tension. In Kochi, the protesters gathered on the National Highway at Vyttila.

The biggest turnout was at Pandalam where hundreds of Ayyappa devotees, a large number of them women, held the ‘Naamajapa Yatra’, called by the Pandalam Palace.

The march began from the NSS Medical Mission junction and culminated on the Valiyakoickal Sastha temple premises around 5.45 p.m.

Addressing the devotees’ meet on the palace premises, Pandalam Palace managing committee president P.G. Sasikumara Varma said the ongoing protest was to protect the ‘Ayyappa Dharma’ and the ritualistic tradition at Sabarimala.

Devotees across the country would stage a united fight from the common apolitical platform against any move to destroy the age-old customs and traditions at Sabarimala.

There has never been any ban on women at Sabarimala and scores of women devotees above the age of 50 and below the age of 10 had been undertaking the Sabarimala pilgrimage for the past so many years, he said.