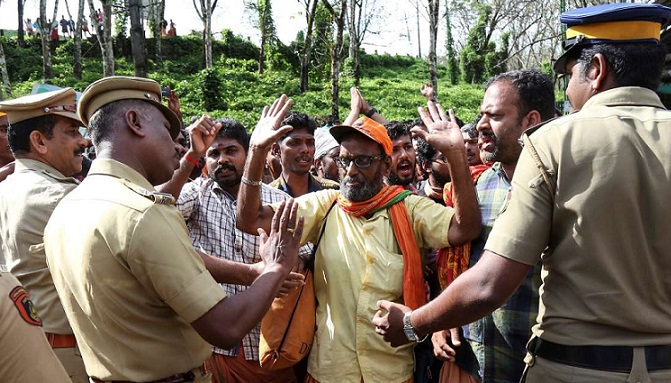 NEW DELHI Oct 25: The Kerala police on Wednesday launched massive search operations for 210 people it suspects of being involved in last week’s violence at Sabarimala, Pamba and Nilakkal that was aimed at preventing the entry of women into the Sabarimala temple.

Lookout notices have been issued for all these 210 individuals.

The Pathanamthitta district has used video grabs of last week’s protests to get the mugshots of all the suspects and prepared an album titled “List of suspects to be identified in various cases relating to the entry of women at Sabarimala”. The album has been sent to police chiefs of all the districts in Kerala.

The Sabarimala temple closed down for the month on Monday with not a single woman being able to visit the shrine due to the protests that followed the Supreme Court’s verdict overturning the ban on the entry of women of a menstrual age.

Kerala chief minister Pinarayi Vijayan has called the protests a “planned” and “deliberate” attempt to create an atmosphere of tension in Kerala and asserted that no force will be allowed to turn the shrine complex into a centre for trouble-makers.

He has blamed the Rashtriya Swayamsevak Sangh for the violence.

“Kerala government made it clear in front of the Supreme Court that it will implement the verdict. The government arranged all facilities.

Neither government nor the police tried to block the devotees. RSS workers tried to make the Sabarimala temple a war zone,” he said on Tuesday.

On September 28, a five-member constitutional bench headed by then Chief Justice Dipak Misra had lifted the ban on the entry of women falling in the age group of 10 to 50 years in the temple, calling the practice “irrational and arbitrary”.

Earlier, women of menstruating age were barred from entering the Sabarimala temple by its officials, who argued that the temple deity Lord Ayyappa had taken a vow of celibacy.