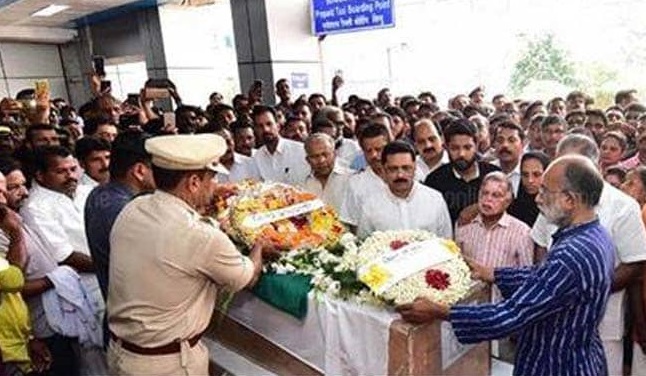 THIRUVANANTHAPURAM Feb 18: The last time CRPF soldier VV Vasanth Kumar called his home in Kerala’s Wayanad was on the morning of Thursday, while he and his colleagues were travelling from Jammu to Srinagar as part of a 78-vehicle convoy.

“At 10 am, Vasanth sent me pictures of dew and mist everywhere. He then called to say that they would take four to five hours to reach their destination. Our conversation ended there,” recalls Sheena B, his wife.

She tried calling Vasanth Kumar again a few hours later, but dead silence was all she got.

As fate would have it, Pulwama in Jammu and Kashmir had just witnessed a terror attack that resulted in the death of over 40 CRPF soldiers.

The perpetrator was a Jaish-e-Mohammed suicide bomber who had driven a vehicle loaded with explosives into one of the buses in the convoy, resulting in an explosion that sent pieces of flesh and metal flying all around. Sheena’s 35-year-old husband was one of those killed in the incident.

Today, a day after Vasanth Kumar’s body was brought home for the last rites, their two children aged eight and five sat innocently with their relatives – not comprehending the extent of the tragedy that had befallen them. Sheena, however, knew all too well about the life that was to follow.

“I want to be able to raise my two children,” she told NDTV with tearful eyes. “My father and husband are no more.”

The family has already requested the Pinarayi Vijayan government to ensure a permanent job at the Kerala Veterinary and Animal Sciences Institute for the soldier’s widow.

“Sheena is well-qualified, and has been working as an assistant at the institute for the last three years. We have requested that she be made permanent,” said Sajeev RV, a cousin.

Vasumita, the soldier’s sister, recalled a blissful childhood spent with Vasanth Kumar. “My brother and I used to go to school together. He used to always take care of me because he was so loving,” she said. “But memories are all I will have of him anymore.”

“Vasanth had come home a week ago. He bought the family enough provisions for two-three months, saying that he will return to attend a family wedding by then. He was the main breadwinner of the family,” said Vishnu R, his brother-in-law.

“The family has requested that the government grant the Vasanth Kumar’s children admission to a Kendriya Vidyalaya, besides a permanent job for Sheena. I will discuss this with the chief minister,” said Mr Balan.

BJP parliamentarian V Muraleedharan said that Vasanth Kumar had died for his country, and his loved ones should not be left to fend for themselves at a time like this. “I have assured them that they can reach out to me anytime,” he added.