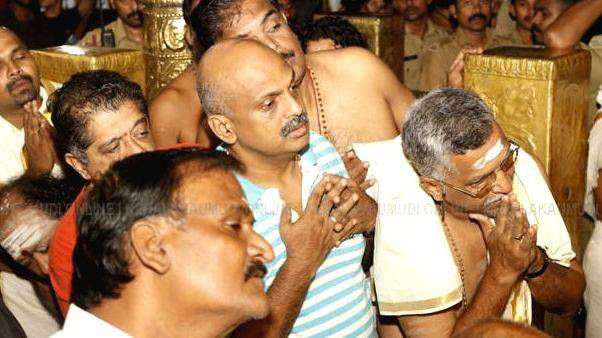 “I prayed at the temple according to my personal belief and I met the tantri after”, said Sreejith.

After meeting the tantri, IG Sreejith reached back in the room and prayed in silence for some time.

The photograph of Sreejith taken by Kerala Kaumudi photographer Ajay Madhu has gone viral in which he can be seen in front of the sanctum sanctorum of Sabarimala with teary eyes.

Sreejith performed ‘darshan’ at the temple on Monday morning.

Woman activist Rehna Fathima, who became famous after ‘Kiss of Love’ and Mojo TV reporter Kavitha Jakkal had reached Sabarimala on Saturday and they were brought to Nadappanthal by the police team led by Sreejith.

However, they returned following the protest of devotees.

“I am also a devotee. I am standing before you as part of my duty. We do not wish to go forward by crushing devotees.

However, law should be implemented according to the Supreme Court verdict.

It is my duty to protect their rights as well”, IG Sreejith had told devotees after the women returned.