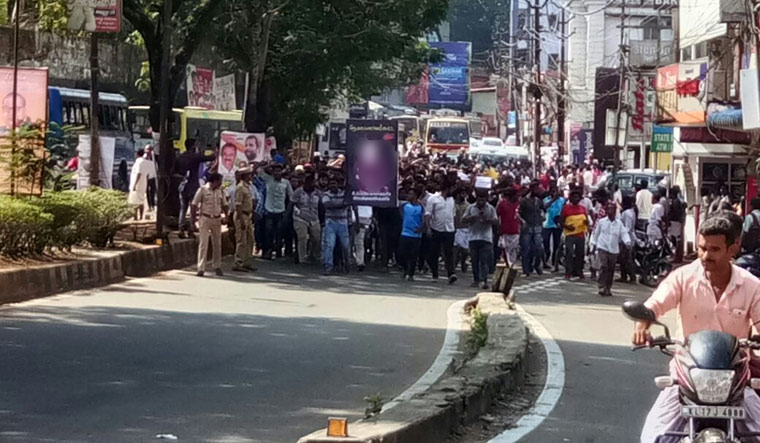 Thiruvananthapuram/Kozhikode April 21: In an attempt get to the source of the hartal call of Monday, transmitted via social media in Kerala, and to get the facts regarding the violence during the shutdown, central Intelligence Bureau chief has arrived in the state. Rajiv Jain held talks with the Governor and state police chief on Wednesday in this connection.

Meanwhile, police has intensified the search for those who gave the call for the hartal for which they are rounding up the Admins of Facebook, WhatsApp groups and taking their statement. This action, unprecedented in the state for any hartal called in the past, has also included some Admins being summoned to the police station.

The IB chief is said to have conveyed the feeling that that the state intelligence failed to convey to the centre the intelligence related to ‘extremist’ activities. There are also reports, not given through any official channels, that the central sources see a nexus of the outfits with international extremist groups.

The state intelligence also has made some reports to the effect that behind the hartal there were attempts to create communal disturbance. In a related response, a demand has also been raised by BJP’s state unit that NIA should investigate the incidents.

Meanwhile, several Muslim organizations have been expressing outrage at the massive arrests of Muslim youth without solid reason, and accuse the police of giving out a message that there has been deliberate attempt to create communal divide. Jama’at-e-Islami Kerala commented that in fact it is the police and mainstream political parties that vitiate the social atmosphere through such irresponsible and hazy allegations. He accused the police of not being able to find out the source of original call for the hartal despite having the machinery in its hands, and makes up for it by dropping speculations.

MI Abdul Azeez, Amir of JI Kerala, also expressed the suspicion that all this is part of diverting attention from the outrage all over the country against the Kathva rape and murder. He said the law and order machinery are not expected to repeatedly arouse fear about extremism and religious hate, but to get at the facts and place them before the people. What they do instead is round up Muslim youth in the hundreds and create fear by clamping prohibitory orders. It is ridiculous, he said, that some political leaders attribute extremism to the spontaneous hartal when the followers of many such parties had taken part in it. It is also objectionable to insist that only hartals called and blessed by mainstream political parties are legitimate.

The police crackdown has also been denounced in a joint statement by a group of about 50 prominent socio-cultural and literary activists, which highlighted the partisan and arbitrary nature of the police action, and demanded the release of those arrested.