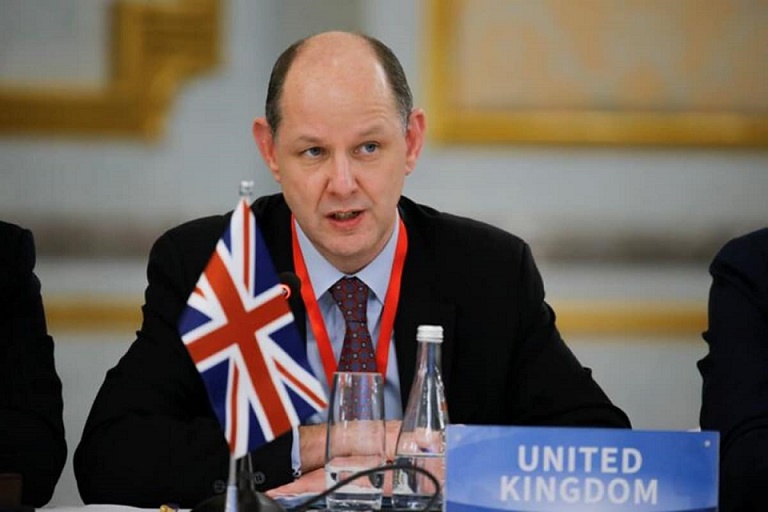 LONDON Aug 4: British High Commissioner to India Sir Philip Barton has been promoted as a minister in the newly formed Foreign, Commonwealth and Development Office.

The UK Foreign Office said Prime Minister Boris Johnson and Foreign Secretary Dominic Raab had approved the appointment of Mr Barton as the Permanent Under-Secretary of the new ministry, which had been unveiled by the UK PM earlier this year as a new “super department” that will merge the UK’s Department for International Development (DfID) with the Foreign and Commonwealth Office (FCO).

“I am delighted that Sir Philip has been successfully selected as the Permanent Under-Secretary of the new Foreign, Commonwealth and Development Office. He is an outstanding public servant and diplomat with experience across all areas of foreign policy,” Mr Raab said.

“Philip is well placed to bring together the talent and expertise of both departments while helping combine our foreign and development policy in a way that is innovative, ambitious and more integrated than ever before,” he said.

Mr Barton takes up his new post from September 1 but the Foreign Office is yet to confirm details around his current posting, based in New Delhi. He had presented his credentials as the British envoy to President Ram Nath Kovind in a virtual ceremony last month.

“I am delighted to have been appointed as the Permanent Under-Secretary of the new Foreign, Commonwealth and Development Office. I look forward to bringing together our diplomats and development experts to deliver for the people of the UK and act as a force for good around the world,” Mr Barton said.

The appointment, confirmed by UK Cabinet Secretary Mark Sedwill, brings to a close the term of Sir Simon McDonald as the head of the soon to be transformed FCO.

Mr Sedwill said: “Philip will bring to the role an understanding of overseas development funding together with experience of international relations. Under his leadership, I am confident that the new organisation will strengthen the UK’s global leadership by aligning our development and diplomatic efforts to bring more coherence to our international presence.

“I should also like to thank Sir Simon McDonald for his leadership of the Foreign and Commonwealth office for the last five years, and Nick Dyer who has been leading the Department for International Development on an interim basis since March.”

A career civil servant, Barton joined the FCO in the 1980s and has held roles such as Director General, Consular and Security, and before that as the Acting Chair of the Joint Intelligence Committee in the Cabinet Office.

Earlier in his career, he was the High Commissioner to Islamabad, Deputy Head of Mission in Washington, and Director, Foreign Policy and Afghanistan/Pakistan coordinator.

His promotion to take charge of the newest government ministry comes after Johnson told the House of Commons in June that his ambition was for the “super department” to maximise Britain’s influence and integrate all strands of post-Brexit Britain.

Mr Raab will continue to head the transformed FCO and will now be empowered to decide which countries receive – or cease to receive – British aid, while delivering a “single UK strategy” for each country, overseen by a National Security Council chaired by the UK PM. – PTI