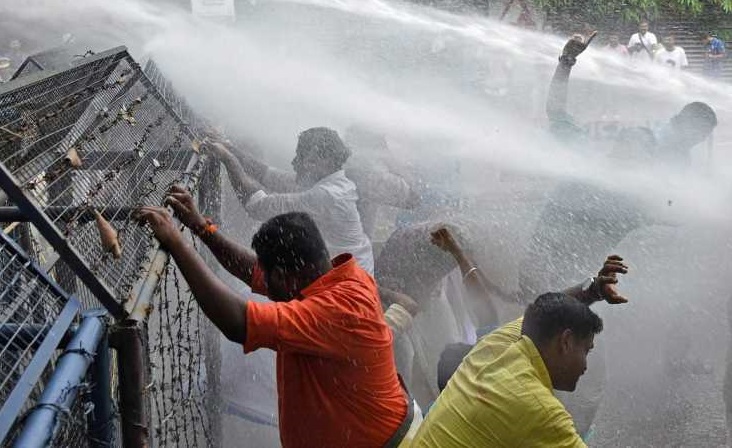 THIRUVANANTHAPURAM Dec 11: The BJP’s “secretariat march” over the Sabarimala issue turned violent, prompting police to use water cannon and tear gas to disperse the protesters.

The day also saw the Congress-led UDF take out a march to the state Assembly over the same.

The BJP and the UDF marched separately, demanding the LDF government’s intervention to end the agitation by their respective leaders for withdrawal of the prohibitory orders around Sabarimala.

The BJP workers threw stones and hurled chairs at police personnel outside the state secretariat when the latter stopped them from proceeding further.

The party had announced the march as part of its intensifying protests over the Sabarimala issue.

Subsequently, the police used water cannon and tear gas to disperse the protesters.

Mr Radhakrishnan has been on an indefinite fast in front of the secretariat building since December 3, demanding the withdrawal of prohibitory orders and various cases registered against party general secretary K Surendran over the Sabarimala protests.

Union Minister Alphons Kannanthanam who met Mr Radhakrishnan at the venue later told reporters that the state government should withdraw the ban orders imposed at Sabarimala and all the “false” cases against the BJP workers over the protests.

The CPI(M)-led LDF government must understand the sentiments of the people and take the initiative to end the “hunger strike” of Radhakrishnan, he said. “Why should Section 144 be imposed in Sabarimala. It is stated that devotees are chanting “nama japam” (Chanting of Ayyappa mantras). Is it a criminal activity?” he asked.

By using tear gas shells and force, government was trying to suppress the protests against the restrictions and prohibitory orders, he said, adding that it was “undemocratic”.

Opposition UDF took out the march demanding that the government intervene and end the indefinite ‘satyagraha’ by its three lawmakers – V S Sivakumar, Parackal Abdulla and M Jayaraj – in the portals of the House since the last eight days over the prohibitory orders in Sabarimala.