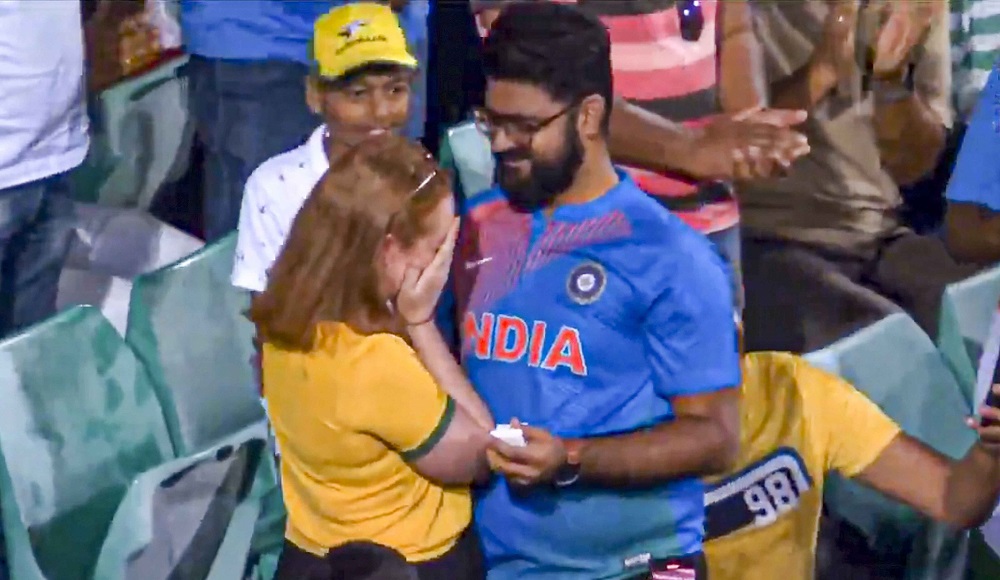 SYDNEY Nov 30: Amid the riveting cricketing action at the Sydney Cricket Ground during the second ODI between India and Australia, there was a romantic side-plot brewing in the stands. During India’s unsuccessful chase of 390, an Indian supporter in the crowd got down on one knee to propose to his partner – an Australian fan.

As the crowd cheered on, she accepted and he got up to give her a hug and a kiss. In a video shared by cricket.com.au that captured the special moment, Australia all-rounder Glenn Maxwell can be seen applauding the couple with a smile on his face.

After beating India in the first ODI at the same venue, Australia sealed a 51-run win to clinch the series as Steve Smith scored his second consecutive century.

Smith was supported by half-centuries from openers David Warner and Aaron Finch as well as Marnus Labuschagne and Maxwell as Australia posted a daunting total of 389/4.

India in return, only managed to score 338/9. Captain Virat Kohli top scored for the visitors with an 87-ball 89.

Openers Mayank Agarwal and Shikhar Dhawan put on a 58-run partnership before both departed in quick succession.

Kohli and Shreyas Iyer then put on a 93-run stand before Moises Henriques dismissed the latter.

Kohli was then joined by KL Rahul, and the two put on 72 runs for the fourth wicket before the Indian captain found the midwicket fielder with a pull shot, falling 11 short of a century.

After KL Rahul was dismissed, India lost their hopes of completing the chase and fell to a 51-run defeat

Pat Cummins finished as Australia’s best bowler, with figures of 3-67.