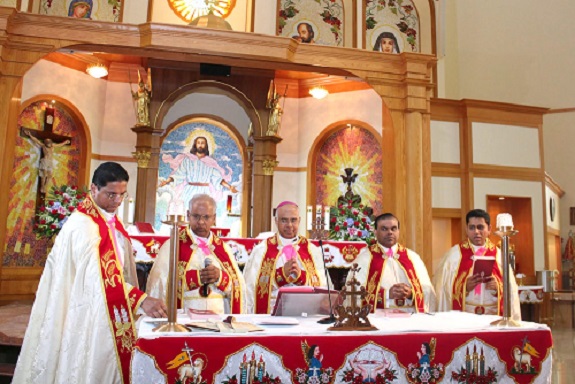 KOCHI July 20: An audio clip, broadcast by a Malayalam television channel on Thursday, purpotedly revealed that the head of the Syro-Malabar Catholic Church had lied about not knowing that a nun had been sexually abused by a bishop, but the Church argued that the conversation had been “wrongly interpreted”.

The clip, aired by Mathrubhumi TV channel, pertains to a talk between Cardinal Mar George Alencherry and the abused nun seemed to show that the former had knowledge that Franco Mulakkal, the Bishop of the Roman Catholic Diocese of Jalandhar (Punjab), had sexually abused her.

In the audio, George Alencherry is heard telling the nun that if she “was abused then it’s really bad”.

But, on Thursday afternoon, the Church in a statement, admitting that while the voice in the audio clip is that of the Cardinal, claimed that the contents has been “twisted and interpreted wrongly”. Instead what she says is that about the problems that she faced there and there was no mention of any abuse that she had undergone, it said.

The nun is then heard seeking advice from the Cardinal, who in his turn says that it would be better if she registers a complaint with the President of the Catholic Bishops Conference of India, Cardinal Oswald Gracias, who is based in Mumbai.

The authenticity of the tape, however, could not be independently verified.

George Alencherry, is also heard telling the nun that he would not say anything about this to police. However, he adds that “if she has been subjected to this, then it”s not correct”.

When the Kerala Police probe team recorded George Alencherry’s statement on Wednesday, he did not reveal any of this.

Earlier in July, George Alencherry had told the media soon after the case of the nun’s abuse had surfaced, that it was true that the nun had spoken to him, but it was related to other issues related to the Jalandhar Diocese and nothing related to the case.

Speaking to the media, the victim’s brother, who is also a Catholic priest, held that the reason why they decided to release the audio tape of the conversation between his sister and the Cardinal, is because he was not speaking the truth.

“We would not have released this particular audio had he told police the truth,” the brother said.

“She had met the Cardinal and given her complaint in writing but no action was taken. It was then that we decided to record the telephone conversation. We have more evidence and will release that also,” said the nun’s brother.

Trouble began for Bishop Mulakkal in June when the nun alleged that she was sexually abused by him several times between 2014 and 2016.

An FIR was registered against the bishop and a 114-page detailed statement was taken from the nun.

Bishop Mulakkal, for his part, maintains that he has done “no wrong at all” and that the nun took part in several functions besides travelling with him.

The probe team has so far collected evidence from a convent near Kottayam, where the bishop is alleged to have abused the nun and on Wednesday, Cardinal Alencherry’s statement was recorded, wherein he said he did not know anything about the nun-bishop case.