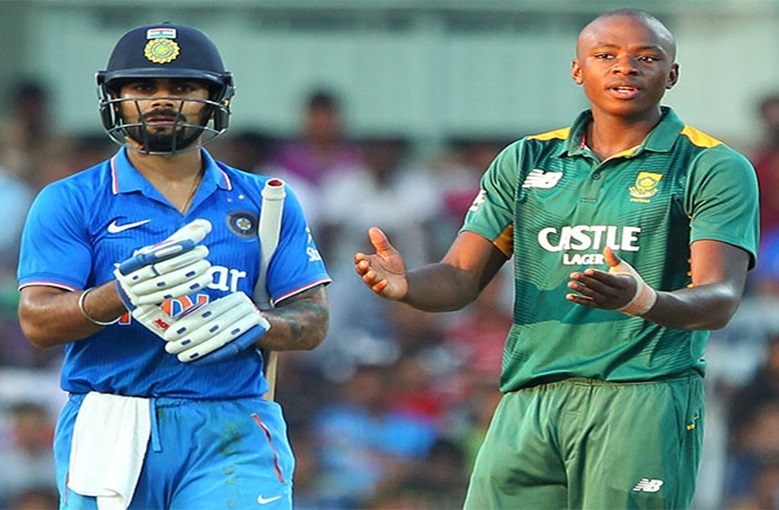 “I was just thinking about the game plan, really, but Virat, he hit me for a boundary and then he had a word. And then when you give it back to him, he gets angry.

I don’t get the guy,” Rabada told thecricketmonthly.com. “Maybe he does it because it gets him going, but that comes across as very immature for me.

He is a phenomenal player but he can’t take the abuse,” Rabada added. Kohli was unaware of Rabada’s remarks until the question popped up in the pre-match press conference on Tuesday and then he hit back at the South African pace spearhead and said he would like to discuss the matter man-to-man.

“Well I have played against Kagiso Rabada many times, will like to discuss man-to-man,” Kohli said. Meanwhile, Dale Steyn was ruled out of the World Cup 2019 due to shoulder injury while Lungi Ngidi will miss the India clash due to a hamstring injury.

Kohli believes whether Ngidi and Steyn feature for South Africa against or not, Rabada is always going to be a world class bowler and a threat to any side he plays against.

Kohli will carry the onus for batting while Rabada will be the vital cog in South Africa’s pace department. The Kohli-led side will open their World Cup 2019 campaign against South Africa. On the other hand, South Africa will be playing their third match in the quadrennial event after having lost to hosts England and Bangladesh.

Kohli also informed that Kedar Jadhav is back to full fitness after his struggle with a shoulder injury. “Jadhav is back in the mix after reaching full fitness. Ravindra Jadeja is batting with maturity now. We know we have a guarantee with all aspects covered. We are equipped to handle all conditions here,” Kohli said.

Speaking on the ongoing tournament, the 30-year-old said: “We are just happy to start playing. There is a bit of an advantage in understanding how the games have gone (watching the tournament from the sidelines). There is a lot to learn about to composure which we have seen.

Teams with composure and making better decisions have had success and it’s important for a tournament like a World Cup.” Kohli, however, said he was feeling bad for his Indian Premier League (IPL) outfit Royal Challengers Bangalore team-mate Dale Steyn, who has been ruled out of the World Cup on Tuesday after failing to recover from a shoulder niggle.

“I am feeling bad for him. He was happy and was bowling well (at RCB) and then we learn that he can’t continue. He was always motivated to play for South Africa. I can understand his frustrations about it. He was happy with his cricket from what I saw at the RCB,” he said.

Speaking on the present conditions in England, Koli said: “Cloud cover is different in England as opposed to having the sun out. With two new balls and good batting conditions, an extra seamer will be handy with cloud cover and if pitch has something to offer.”

“It will definitely be challenging for the batsman with early start and we have planned accordingly,” he added. The India skipper also felt that his team has learnt from the mistakes of the 2017 Champions Trophy when they lost to arch- rivals Pakistan in the final and the captain has said that introducing wrist spinners in the side was a step in that direction.

“The lessons from the Champions Trophy — is to play the cricket we know how to play. In the final, the better side won. We have plugged the gaps. We brought in wrist spinners to take wickets in the middle overs.

We are a stronger side than Champions Trophy side.” The 30-year-old also expressed confidence in his team and said they have a good chance of winning their group stage games.