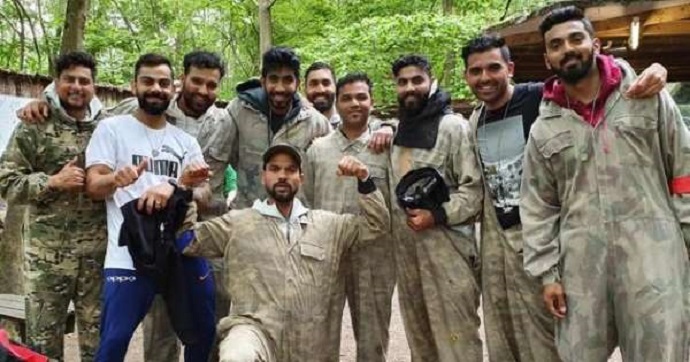 LONDON June 1: MS Dhoni, Virat Kohli and some other premier members of Team India enjoyed some downtime in the woods before their World Cup 2019 campaign opener against South Africa on June 5.

The Indian cricket board posted the pictures of their team’s “fun day out in the woods” on their official Twitter account which led to fans raising various concerns about their national team.

The ever-enthusiastic Indian cricket team fans’ concern majorly revolved around their practice session, with some saying the Virat Kohli-led side might lose out on the World Cup 2019 trophy due to these fun times.

Interestingly, one of the fans also reminded Team India, that they have been sent to England to play World Cup 2019 and not to enjoy picnic.

Team India members were dressed up in paintball uniforms with all wearing a happy smile. India will be vying for their third World Cup title, first under the leadership of their flamboyant skipper Virat Kohli.

Team India’s first opponent in the World Cup 2019 — South Africa, registered a loss against hosts and favorites England in the campaign opener in absence of their senior pacer Dale Steyn.

South Africa will next face Bangladesh before taking on India, on Wednesday in Southampton.