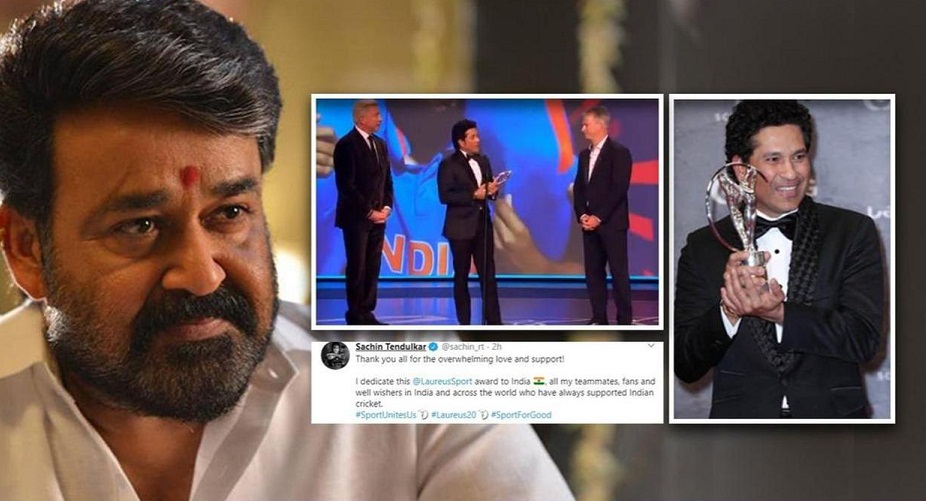 SYDNEY Feb 19: As Sachin Tendulkar was honoured at the Laureus Awards for ‘Best Sporting Moment’, Mohanlal termed it a ‘proud moment for all Indians’ and called it deserving.
There are not many awards that Sachin Tendulkar has not won in his life. When the government’s highest civilian honour Bharat Ratna has been bestowed on him, one can’t expect anything bigger in India.

Now, the legendary cricketer’s greatness is being recognised even abroad, as he was presented with the Laureus Award for Best Sporting Moment in the last 20 years.

As the presentation and Sachin’s speech became a major talking point on social media, even celebrities joined in sending their congratulatory wishes to the ‘Master Blaster’.

Team Indian Captain Virat Kohli and coach Ravi Shastri, also his former teammates, led by the flurry of messages for his honour.

But that was not all, even stars from the film industry felt delighted and proud of Sachin’s achievement. One of them was another legend Mohanlal.

The Malayalam superstar termed Sachin’s Laureus Award award as a ‘proud moment for all Indians’ The Drishyam star added that the highest run-scorer in international cricket ‘truly deserved’ this award.

The major connection between the two, apart from being legends, has been their association with the Indian Super League franchise Kerala Blasters.

While Sachin was the co-owner of the franchise before exiting the team, Mohanlal has been spotted at the promotional events related to it.

The Laureus Award, an annual award ceremony honouring sporting talents across the world, felicitated the moment of Sachin being lifted by his teammates as he waved the tricolour after the 2011 World Cup win at Mumbai’s Wankhede stadium as the ‘Best Sporting Moment’ of the last 20 years. F1 champion Lewis Hamilton and Italian football veteran Alessandro Del Piero were among those present in the audience.

Sachin was presented the award by Australian great Steve Waugh and tennis legend Boris Becker in Berlin. The ‘Master Blaster’s speech, where he recalled the dream of winning a World Cup after seeing the 1983 World Cup victory celebrations, the pride of representing India and interaction with Nelson Mandela on sport unifying people, went viral.