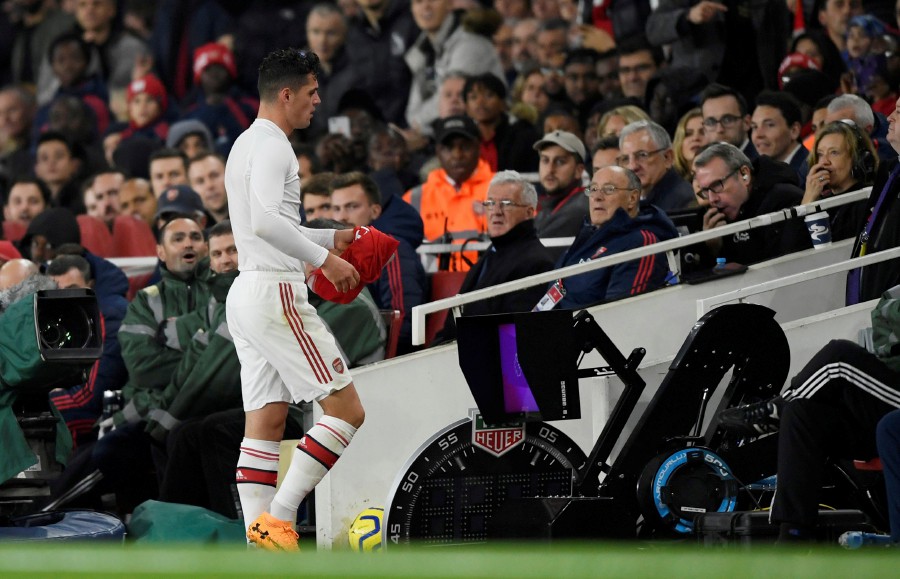 LONDON Nov 7: Arsenal manager Unai Emery confirmed on Tuesday that Granit Xhaka has been stripped of the club captaincy after an emotional outburst towards supporters.

The Swiss international swore and threw the captain’s armband to the floor after being booed as he was substituted against Crystal Palace 10 days ago. Pierre-Emerick Aubameyang, who led Arsenal for Saturday’s 1-1 draw at home to Wolves, will take over as captain.

Xhaka was not included in the squad for the Wolves match or Wednesday’s visit to Vitoria Guimaraes in the Europa League.

“We have now Aubameyang, Hector (Bellerin), (Alexandre) Lacazette and (Mesut) Ozil – they are the four captains, and first is now Aubameyang.”

“I needed to take one decision, and now it is closed,” Emery added.

Xhaka, 27, blamed death threats to his family for his furious response, saying he had reached “boiling point”.

“My feeling of not being understood by fans, and repeated abusive comments at matches and in social media over the last weeks and months have hurt me deeply,” he wrote on Instagram.

“People have said things like ‘We will break your legs’, ‘Kill your wife’ and ‘Wish that your daughter gets cancer’.

“That has stirred me up and I reached boiling point when I felt the rejection in the stadium.”

Xhaka had only been confirmed as captain by Emery in September after the Spaniard took a dressing room vote to decide on the skipper after the departures of Laurent Koscielny and Petr Cech.