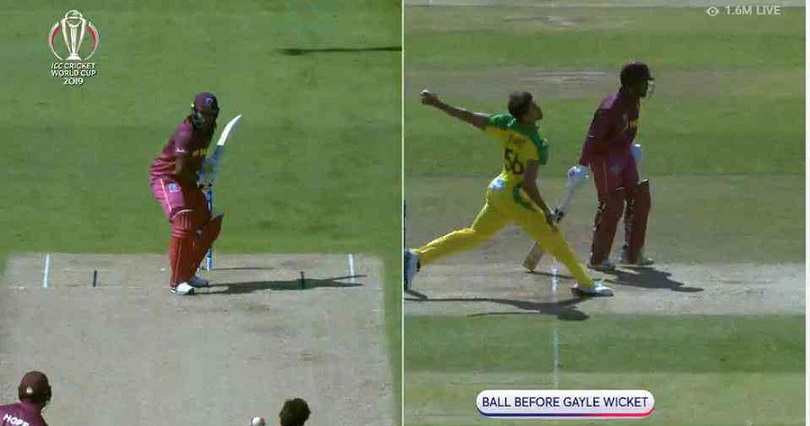 LONDON June 7: Chris Gayle lost his wicket off a free hit during West Indies’ World Cup 2019 match against Australia at the Trent Bridge, Nottingham, on Thursday. Both cricket pundits and fans launched an attack on Ruchira Palliyaguruge and Chris Gaffaney for poor umpiring on the field, with West Indies bowling legend Michael Holding calling the umpiring “atrocious”.

Later skipper Jason Holder also had to suffer from a similar umpiring howler. West Indies failed in chase of 289 and suffered a 15-run loss to Australia.

Holding, commentating on television, was scathing about the “weak” officiating on show at Nottinghamshire’s headquarters. “The umpiring in this game has been atrocious,” he said.

The 65-year-old Jamaican added Gaffaney and Palliyaguruge had caved into pressure created by prolonged Australia appeals.

“For one, even when I was playing and you were not as strict as they are now, you were allowed one appeal,” recalled Holding, who infamously kicked down the stumps during a 1979/80 Test in Dunedin after his appeal to have New Zealand’s John Parker caught behind was rejected by umpire Fred Goodall.

“You don’t appeal two, three, four times to the umpire. They are being intimidated which means they are weak. This has been an atrocious bit of umpiring by both (Gaffaney and Palliyaguruge).”

After the match, Carlos Brathwaite said the West Indies were on the wrong end of too much poor umpiring.

Gayle and Holder were both twice given out on the field but, on both sets of occasions, saw their decision to review vindicated by the third umpire.

The mood of the Caribbean side was not helped when standing umpire Gaffaney missed a Mitchell Starc no-ball the delivery before the left-arm quick dismissed Gayle for 21.

Had the New Zealand official called a no-ball, the next delivery would have been a free hit from which the veteran opener could not have been dismissed.

Brathwaite accepted Gaffaney and Sri Lanka’s Palliyaguruge were doing their best, but he made no attempt to hide his annoyance after the West Indies fell short chasing a target of 289 in Nottingham.

“I don’t know if I’ll be fined for saying it but I just think that the umpiring was a bit frustrating,” Brathwaite told reporters.

“Even when we were bowling we thought a few balls close to head height were called wides.

“And obviously three decisions…as far as I can remember being dodgy, it was frustrating and sent ripples through the dressing room,” the all-rounder added.

“To lose Chris in a chase of 280, who can probably get 180 of them himself obviously, broke the start that we wanted to have.

“But the umpires do their job, they try to do it to the best of their ability, we as players go out there to do our job as well, so there was no confrontation between the players and the umpires.”

Gaffaney raised his finger twice in three balls to gove Gayle while Palliyaguruge was two-times over-ruled by replays after raising his finger against Holder.

Brathwaite made it clear the decisions had not been the key reason why the West Indies had lost, but said they were part of a concerning pattern.