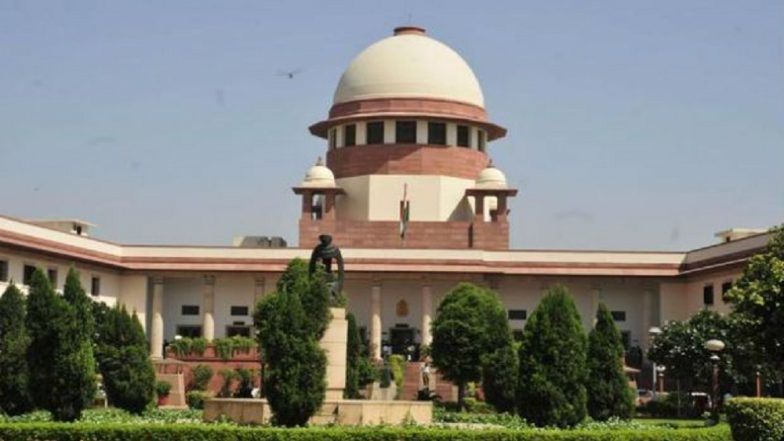 NEW DELHI July 18: The Supreme Court has commenced its hearing on the contentious issue relating to the ban on entry of women between 10 and 50 years of age in Kerala’s historic Sabarimala temple.

A five-judge Constitution bench headed by Chief Justice Dipak Misra asked the counsel for petitioners Indian Young Lawyers Association and others to limit their arguments on the questions of reference made by a three-judge bench of apex court last year.

The bench also comprising justices R F Nariman, A M Khanwilkar, D Y Chandrachud and Indu Malhotra fixed the time limit for the counsel for petitioners and asked them to try to wrap up their arguments within the fixed time limit.

Advocate RP Gupta commenced the hearing for the petitioners and referred to the history of the temple.

“You should not go into unnecessary things and counsel should limit their arguments to the issues referred to Constitution bench,” the bench said.

The hearing remained inconclusive and would continue on Wednesday.

The apex court had on October 13 last year referred the issue to a Constitution bench after framing five “significant” questions including whether the practice of banning entry of women in the temple amounted to discrimination and violated their fundamental rights under the Constitution.

One of the questions referred to the larger bench was, “Whether the exclusionary practice which is based upon a biological factor exclusive to the female gender amounts to ‘discrimination’ and thereby violates the very core of Articles 14, 15 and 17 and not protected by ‘morality’ as used in Articles 25 and 26 of the Constitution.”

The management of the Sabarimala temple, located on a hilltop in the Western Ghats of Pathanamthitta district, had earlier told the apex court that the ban on entry of women aged between 10 and 50 years was because they cannot maintain “purity” on account of menstruation.

The second issue referred to the constitution bench is whether the practice of excluding such women constitutes an “essential religious practice” under Article 25 of the Constitution and whether a religious institution can assert a claim in that regard under the umbrella of right to manage its own affairs in the matters of religion.

The constitution bench would also deal with whether the Ayyappa temple has a denominational character and “if so, is it permissible on the part of a ‘religious denomination’ managed by a statutory board and financed under Article 290-A of the Constitution out of Consolidated Fund of Kerala and Tamil Nadu to indulge in such practice violating constitutional principles/morality embedded in Articles 14, 15(3), 39(a) and 51-A(e)”.

The apex court had framed another question as to whether Rule 3 of Kerala Hindu Places of Public Worship (Authorisation of Entry) Rules permits ‘religious denomination’ to ban entry of women between the age of 10 to 50 years.

“And if so, would it not play foul of Articles 14 and 15 (3) of the Constitution by restricting entry of women on the ground of sex,” it had said.

Rule 3(b) of the Kerala Hindu Places of Public Worship (Authorisation of Entry) Rules, 1965 says that “women at such time during which they are not by custom and usage

allowed to enter a place of public worship shall be included in the class of persons who shall not be entitled to offer worship in any place of worship.”

It had also raised the question whether this rule is ultra vires the Kerala Hindu Places of Public Worship (Authorisation of Entry) Act, 1965 and, “if treated to be intra vires, whether it will be violative of the provisions of Part III of the Constitution.”

Petitioner Indian Young Lawyers Association and others have sought directions from the court to ensure entry of female devotees between the age group of 10 and 50 at the Lord Ayappa temple at Sabarimala.

On November 7, 2016, the Kerala government had informed the apex court that it favoured the entry of women of all age groups in the historic Sabarimala temple.

Initially, the LDF government had taken a progressive stand in 2007 by favouring women’s entry into the temple, which was overturned by the Congress-led United Democratic Front (UDF) dispensation later.

The UDF government had taken a view that it was against the entry of women of the age group of 10-to-50 years as such a practice was being followed since time immemorial.