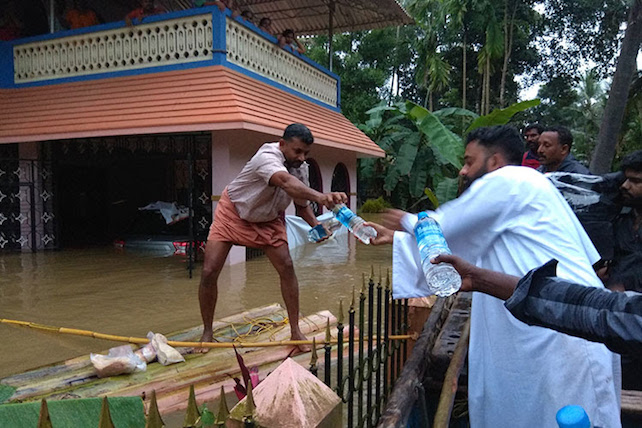 THIRUVANANTHAPURAM Sept 3: In a sermon of a different kind, a Catholic priest addressed Muslim brothers in a mosque to express his gratitude for their selfless service in feeding the flood victims who had taken shelter at his church.

By offering the Christian priest the same platform where a ‘Maulavi’ (muslim cleric) addresses believers, the mosque authorities have showcased a rare model of togetherness in the post-flood state.

Fr Sanu Puthussery, who belongs to the Syro-Malabar Church, had visited the Juma Masjid at Vechoor in Kottayam district during Jum’ah (Friday prayers) on August 31 and delivered a thanksgiving speech at the Masjid prayer hall.

As the deadliest floods lashed the state two weeks ago, over 580 persons sought refuge at St Antony’s Church at Achinakom where Fr Puthussery is the priest.

Though the Church authorities gave shelter to the hapless people, they found some shortage of food and water to feed them the next day.

“I straightaway went to the Masjid, appraised the Maulavi about our difficulty and requested his help. After the day’s prayers, Muslim brothers came to the church with a large quantity of food and water as per his direction,” Fr Puthussery told PTI.

“I cannot express my gratitude to them in words. That much help and support they had extended during the time of difficulties,” he said.

They had continued to bring essential articles to the relief camp at the church.

Besides food and water, essential medicines were also brought by the youths attached to the Masjid, he said.

“I went to the Masjid to meet the Maulavi and other authorities and thank them personally. But they invited me to their prayer hall and offered me their platform to speak. It was a rare gesture of togetherness,” the priest said.

It was a different experience for over 250 believers, who were at the Masjid to attend Friday prayers.

In his nearly 10-minute speech, Fr Puthussery said not only the floods snatched away many valuables from people, it also washed away the walls of differences among them. Remembering Pope Francis he said,

“Pope Francis has said build bridges, not walls. The devastating flood has now given us an opportunity to destroy the walls and build the bridges of togetherness,” the priest added.